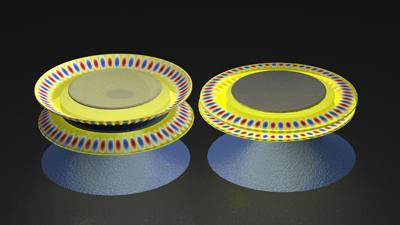 Mian Zhang/Cornell Nanophotonics Group
A schematic of two optically coupled, micromechanical oscillators. Each consists of silicon nitride membranes set to a "flapping" oscillation by the force of light. This light force couples the mechanical motion of the oscillators by tunneling through the small gap between them, which eventually leads to their synchronization.

Synchronization phenomena are everywhere in the physical world -- from circadian rhythms to side-by-side pendulum clocks coupled mechanically through vibrations in the wall. Researchers have now demonstrated synchronization at the nanoscale, using only light, not mechanics.

Two tiny mechanical oscillators, suspended just nanometers apart, can talk to each other and synchronize by means of nothing but light, according to new research published Dec. 5 in Physical Review Letters.

The work is a collaboration between the research groups of Michal Lipson, associate professor of electrical and computer engineering, and Paul McEuen, the Goldwin Smith Professor of Physics, both members of the Kavli Institute at Cornell for Nanoscale Science. The study is featured on the journal's cover and as an "editors' suggestion," and the paper's first author is Mian Zhang, a graduate student in the field of applied and engineering physics.

Lipson's group had previously established that the optical properties of a nanoscale silicon nitride structure can be manipulated with light. Zhang and colleagues took this discovery a step further by demonstrating that two distinct micromechanical oscillators placed in a vacuum, each a hair's width in diameter and spaced 400 nanometers apart, can be synchronized in both phase and frequency through coupling mediated purely by an optical radiation field.

The researchers demonstrated switching this coupling on and off as well as tuning their frequencies, thanks to established microphotonics techniques that control the optical radiation field, Zhang said.

The robustness of this phenomenon could mean a host of new nanoscale photonic capabilities, say the researchers. For example, they could be used in tuned oscillator networks for sensing, signal processing and nanoscale integrated circuits.

The work was funded in part by the Center for Nanoscale Systems, an Integrative Graduate Education Research and Traineeship, and the Cornell NanoScale Science and Technology Facility, all of which are supported by the National Science Foundation.