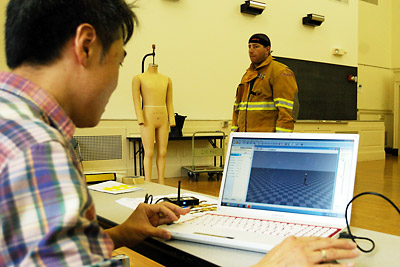 The top firefighter injury isn't burns or smoke inhalation, but damage to the muscles and skeleton, such as ankle sprain.

A Cornell protective clothing expert is trying to change that -- with a five-year project to make firefighters' movements more natural and comfortable by designing better-fitting protective gear.

"Boots provide mechanical protection from burns, but they're very uncomfortable. Every step is an effort to move forward," said Park.Bulky gear is a major cause of firefighters' onsite injuries, said Huiju Park, assistant professor in the Department of Fiber Science & Apparel Design in the College of Human Ecology, the project's principal investigator.

With graduate students and undergraduate members of his Functional Aspects of Clothing Design class, Park and his research team are using advanced 3-D motion capture system technology and plantar pressure sensors to assess how protective equipment affects firefighters as they walk and climb stairs in a simulated work environment. The 3-D imaging -- the same technology used to create special effects in films and video games -- records subtle changes in balance, foot comfort and joint movement.

During a recent testing session, a firefighter strapped on 22 sensors as wires dangled around her. She looked like she came out of a scene in "Mission Impossible," quipped research assistant Yingying Wu, a doctoral student in the field of apparel design and part of Park's research team. Park reminds the firefighter to act natural: "Don't worry about the sensors -- just be yourself."

So far, Park has analyzed the range of motion at each joint for eight male and four female firefighters, as well as the pressure applied inside their shoes. They have also examined the ways the body is affected by wearing protective gear, as well as what causes poor balance and inefficient movement. 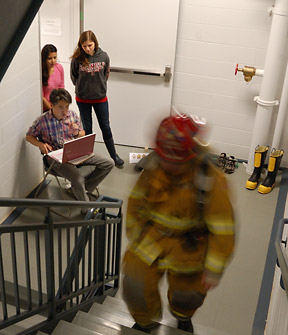 Funded by the federal government, the experiment is based largely on firefighters' input from a focus group and survey Park's team conducted this past summer. Park aims to develop new performance and design guidelines for protective gear as part of a larger study with researchers at the University at Buffalo and Colorado State University.

Park is particularly interested in the difficulty many female firefighters have in finding well-fitting coats and pants. Because firefighting is traditionally a profession for men, manufacturers don't consider women to be major customers, he said.

Finding firefighting clothing that fits is difficult, said a woman participating in the preliminary study. "I'm here because hopefully in the future, someone will have stuff that fits the first time."

At the study's end, Park hopes to be able to suggest a better design for protective gear. He expects manufacturers to be interested, but, he emphasized, that's not the primary goal of his project.

"This is not about business," Park said. "It's about protection for first responders who care for our community."

Park has collaborated with International Personnel Protection Inc. on his research, and Honeywell First Responder Products donated 26 pairs of rubber and leather firefighter boots to the experiment.

Sarah Cutler '16 is a student communications assistant for the College of Human Ecology.