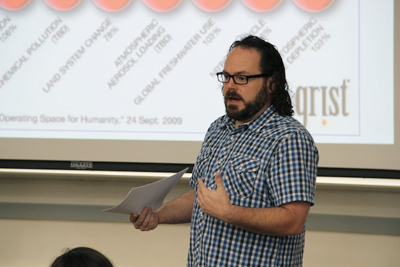 Students often tell ecologist Jed Sparks that he lectures differently from other professors. But then, not many Cornell scientists began their careers under the bright lights of Broadway.

The first person in his family to attend college, Sparks received a full scholarship to the University of Utah's theater department; he also spent two years in professional theater, from an Andrew Lloyd Webber show on Broadway to numerous regional productions. "I did anything to make enough money to pay the rent -- acting, lights, stage crew, everything," Sparks recalls. "I loved it. It's a great lifestyle."

Now an associate professor of ecology and evolutionary biology (EEB), Sparks continues to put his theater experience to use in the classroom.

Faced with students losing interest 40 minutes into a 75-minute lecture, Sparks adds what he calls "the third act peppy number" featured in every successful musical. The "peppy number" can be as silly as having the 500 students in a lecture hall stand up and scream, he explains, or more academic, like switching to an interactive group activity.

Getting students actively involved in learning is crucial to Sparks, who has worked extensively with the Center for Teaching Excellence. He's also been applying new methods of teaching science based on the research of Nobel laureate Carl Weiman. Like Weiman, Sparks wants his students to think for themselves. "The only way people learn is when their minds are occupied with a problem -- not listening to the problem but engaged in it," says Sparks, noting that this approach to teaching helps everybody, from top students to those at risk.

For a recent session of the advanced ecology class he co-teaches with EEB professors David Winkler and Stephen Ellner, Sparks gave students an improvisation exercise to get them engaged. He played a New York Times reporter calling for one minute of sustainability advice. The class then ranked each other's advice and gave feedback. "It was fun," says Sparks. "They loved it."

Even the way Sparks constructs his lectures is drawn from the lessons he learned as a director. Rather than identify the points he needs to cover and building his talk around them, he identifies the themes and the story line of his material and uses them to structure his lectures. He uses a similar approach in his scientific writing.

But Sparks says the other theater techniques he uses in his teaching are not done consciously. Rather, he says, "when I approach a problem, theater was my original training so that's what I do. I never consciously think, 'This is something I learned in motion class or directing.'"

His unpremeditated use of theatrical blocking may be one reason why students like Vadim Karatawer '14 describe Sparks' presentation of material as "helpful and clear." For example, when describing electron transport going from high to low, Sparks gestures with one hand above his head, the other by his knee. "Just by making that gesture the description starts to make sense," Sparks explains. "Humans are very spatial in how they perceive things."

And, like a mime, Sparks uses his hands to create pictures in space, such as the way he forms a globe when describing Earth's problems.

Best of all, Sparks slips in and out of character during class, like the upper-crust accent he dons when describing how a fellow professor scoffed at him, or the Monty Python-style falsetto he affects when making up a nonsensical ad about carbon trading and weight loss. The students laugh, their attention riveted on Sparks -- entirely engaged and ready for his next act.