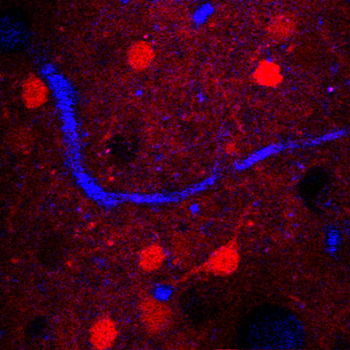 Xu lab
A horizontal frame from 3-D reconstructed three-photon microscopy images in a mouse brain. The red is neurons, the blue is blood vessels, and the dark holes are non-fluorescent neurons.

Scientists may be a step closer to cracking one of the world's most compelling mysteries: the impossible complexity of the brain and its billions of neurons. Cornell researchers have demonstrated a new way of taking high-resolution, three-dimensional images of the brain's inner workings through a three-fold improvement in the depth limits of multiphoton microscopy, a fluorescence-based imaging technique with Cornell roots.

They have broken the fundamental depth limit of standard two-photon microscopy, which is a widely used imaging technology invented in 1990 by Watt Webb and Winfried Denk at Cornell. Xu and Webb demonstrated three-photon fluorescence imaging while Xu was a graduate student in Webb's lab in 1995, but its advantages were not fully recognized then, Xu said.

The new paper describes three-photon fluorescence, combined with a longer excitation wavelength of the laser pulse, to overcome such obstacles as tissue scattering and absorption, which prohibit high-resolution imaging deep within biological tissues. The new paper shows that three-photon microscopy is a much better technology in the context of deep tissue imaging, making multiphoton fluorescence microscopy truly "multiphoton."

Using a mouse model, the researchers have proved the principle of three-photon microscopy operating at a wavelength of 1,700 nanometers. This, in combination with the new laser specifically created for three-photon excitation, allows the researchers to perform high-resolution imaging of neurons at unprecedented depths within a mouse brain.

Pushing these depth limits is important for basic science and eventually could prove useful clinically, Xu said. Depression and diseases like Parkinson's and Alzheimer's are associated with changes deep inside the brain, and finding the cures could be helped by subcortical neural imaging -- that is, below the gray matter of the brain and into the white matter and beyond, if the brain is visualized as stacked layers.

"Brain mapping could be the so-called grand challenge within the next decade," Xu said. "With MRI, we can see the whole brain but not with the resolution we have demonstrated. The optical resolution is about 100 to 1,000 times higher and allows us to clearly visualize individual neurons."

In the mouse model, the researchers used dyes and transgenic mice to test their multiphoton microscope on different fluorescent signals and prove their concept. If three-photon microscopy can be used to map the entire mouse brain, it could ultimately help shed light on the functions of human brains and pave the way to breakthroughs in neuroscience and other clinically relevant areas, Xu said.

The paper's first authors are graduate students Nicholas Horton and Demirhan Kobat and research associate Ke Wang, and includes contributions from the labs of Frank Wise, professor of applied and engineering physics, who helped with the laser optics; and Chris Schaffer, associate professor of biomedical engineering, who taught the applied physicists how to do in vivo mouse brain imaging.