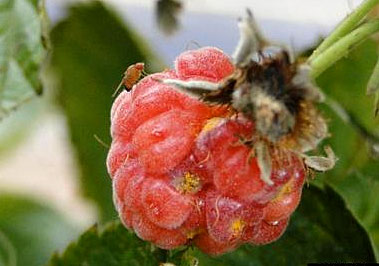 A tiny fruit fly, native to Asia, has become big trouble for raspberries, strawberries, cherries and blueberries coast to coast in the U.S. So Cornell researchers are zeroing in on ways to combat the invasive spotted wing drosophila -- SWD for short. SWD is poorly understood and highly destructive.

SWD took up residence in California a few short years ago; last year, it caused up to $1 billion in nationwide crop and job losses, according to the U.S. Highbush Blueberry Council.

"In my 30-plus years in the blueberry business, this is the worst problem I've seen yet," says grower and U.S. Highbush Blueberry Council board member Dennis Doyle. Meanwhile, many raspberry growers had to abandon fall plantings of what had long been a trouble-free crop.

Although SWD had troubled growers in the Hudson Valley in 2011, it is now just about everywhere in the state, says Greg Loeb, professor of entomology at NYSAES. "Some growers lost 100 percent of their crops," he says. "And those losses weren't just isolated incidents. This new pest is a serious threat."

While most fruit flies "infest fruit that's already past its prime," and unmarketable, "SWD attacks fruit just as it ripens, and you can't always see the damage until it's too late," Loeb says. And because SWD is so new, he adds, scientists' knowledge of it and how to manage it is rife with yawning gaps.

Loeb, Carroll and Laura McDermott, a Cornell Cooperative Extension small-fruit specialist in eastern New York, convened a daylong meeting of 50 researchers and growers from across the Northeast and from the Canadian provinces Ontario, Quebec and Nova Scotia this past November. The attendees reported to and learned from each other, then listed and voted on every possible research, regulatory and educational angle (79 altogether) they could take to tackle SWD. The top research priorities included repellants, attract-and-kill techniques and overwintering biology, among others.

Ideally, researchers will find biological controls -- diseases or parasites that prey on SWD alone. "But that kind of work takes years. Until then we've got to devise the best possible combination of lures, trap crops and low-toxicity sprays," says Dale-Ila Riggs, president of the New York State Berry Growers Association, which helps promote collaboration between researchers and growers.

Mary Woodsen is a science writer with the NYS IPM Program.