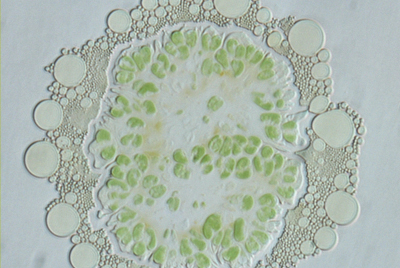 Arum Han/Texas A&M University
This photo shows oil being squeezed from the algae species, Botryococcus Braunii. B. Braunii is known for its production of oil, which converts relatively easily into gasoline and diesel.

Although biofuels from algae hold great promise, Cornell researchers find that more innovation is needed to make the technology economically and energetically viable at a commercial scale.

To date, researchers have struggled to determine if the nonrenewable energy it takes to make a gallon of algal biofuel will be equal to, less than or greater than the energy produced.

A Cornell study published online Dec. 13 in the journal Environmental Science and Technology has addressed that question. The work was led by Deborah Sills, a postdoctoral associate in the research groups of Charles Greene, director of the Ocean Resources and Ecosystems Program and professor of earth and atmospheric sciences, and Jefferson Tester, associate director for energy at the Atkinson Center for a Sustainable Future and the Croll Professor of Sustainable Energy Systems in the School of Chemical and Biomolecular Engineering.

The researchers used computer simulations to analyze uncertainties in the algal biofuel production lineup. They found that when oil is extracted from algae through thermal drying, or when the algal cultivation step has a low yield, the energy produced is less than the energy expended to produce the fuel. However, when methods that promote high algal yields are matched with wet extraction techniques -- both processes that require further technical innovation -- algal biofuels can provide a viable alternative to liquid fossil fuels, like gasoline and diesel.

Compared with land plants, algae can produce greater than 10 times more oil per acre, use nutrients more efficiently, and do not require high-quality agricultural land. Also, marine algae do not require large quantities of freshwater.

The study examines each step in the process, from growing marine-based algae to separating and refining biofuel products and by-products. A life cycle framework helped establish ranges of possible outcomes with probabilistic methods employed to characterize key variables, which the authors say is the correct approach for assessing such developing technologies.

"Our biggest contribution is pointing out how important it is to report the range of values needed for technologies that don't exist," Sills said. "There is no algae to biofuel industry yet," so no large-scale sets of data exist to judge how feasible algal biofuels can be, Sills added. "We show that improvements are needed at every single step of the process."

"We've tried to be more transparent and reflect on the inherent variability and unknown character of the processes involved," Tester said.

Values reported in previous studies, while not incorrect, represented specific case studies and often reported findings as a single value. This yielded incomplete information for making strong conclusions about the viability of algal biofuels, the researchers said.

Making biofuels from algae is a five-step process: cultivation; harvesting and dewatering; lipid (oil) extraction; lipid conversion to liquid biofuel; and creating such value added co-products as methane from bio-digesters, or animal feed from leftover carbohydrates and proteins.

While all the steps require improvements, a few of the processes fared particularly poorly, according to the study. For example, all the scenarios studied failed to reach a break-even point when algae were grown with methods that had low yields of biomass. The cultivation phase involves growing algae in large open ponds with a mixer to expose algae to the sun. Fertilizers and carbon dioxide, potentially provided from industrial sources, are needed. Algal productivity depends on species, sun exposure, temperature, competing organisms, culture densities and nutrients.

Similarly, during the lipid extraction phase, no scenario supported a dry extraction process as an energetically viable option. Thermal drying requires too much energy, with solar drying alternatives requiring space. Wet lipid extraction using water under high temperatures and pressure produced the best results, especially when coupled with growing methods that produced high biomass, though those technologies have only been tested on small scales.

The study was supported by in part by the U.S. Department of Agriculture and Cornell's Atkinson Center for a Sustainable Future.