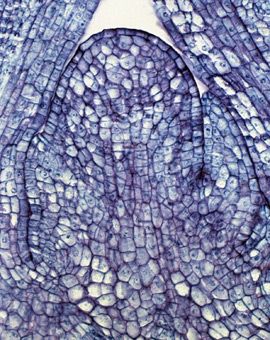 Michael Scanlon
Close-up of the maize shoot apical meristem, a pool of plant stem cells being studied by plant biologist Michael Scanlon as part of a $7 million grant.

Scanlon leads a team of nine researchers who study the maize shoot apical meristem (SAM) -- a pool of plant stem cells responsible for forming essentially all of the above-ground parts of the corn plant.

"The meristem we study has a characteristic shape and a lot of diversity," Scanlon said. "This is the part of the plant that contains the stem cells that will give rise to every and all organs in the plant. We're interested in learning how those differences are controlled genetically."

In addition to being one of the world's most important staple crops, maize is also one of the most genetically diverse. Hunter-gatherers in what is now Mexico began breeding corn's ancestor, the weed teosinte, 10,000 years ago. Now, largely thanks to human-directed plant breeding, maize is so genetically diverse that any two races can vary by 2-3 percent -- as genetically different as a human and a chimpanzee.

"One of the main goals of the project is to understand the genetic and epigenetic networks contributing to this remarkable diversity," Scanlon said.

The group also hopes to understand how meristem structure and function influence adult maize plants, which has implications for agriculture and biofuels.

"In terms of application, if you want to modify growth -- leaf length, leaf growth, flowering time -- all of that comes from the meristem. If you want to modify the portion of the plant that goes toward flowers, to grow food, as opposed to carbohydrates, which are used for biofuels, you need to understand what's happening genetically within the meristem," Scanlon said.

Another primary goal of the project is to understand how young meristems are affected by the shading typical in closely planted corn fields.