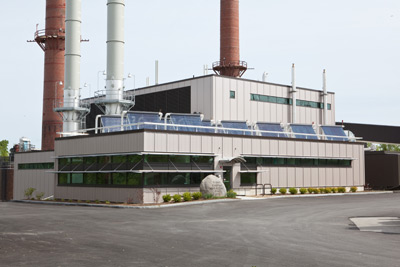 Cornell reduced its greenhouse gas emissions by 7 percent between fiscal years 2010 and 2012, according to an energy inventory the university submitted to the American College and University Presidents Climate Commitment (ACUPCC) Jan. 14.

The Campus Sustainability Office and Facilities Services have submitted an energy inventory to the ACUPCC every two years, with the first one covering fiscal year (FY) 2008.

The inventories honor a commitment to transparency and carbon footprint reduction. President David Skorton pledged Cornell to climate neutrality by 2050 when he signed on to the ACUPCC in 2007. A Climate Action Plan was released in 2009.

A 25 percent reduction from July 2008 to June 2010 was largely due to Cornell's 30-megawatt Combined Heat and Power plant going online in late 2009. The plant burns natural gas to generate electricity. The otherwise "wasted heat" is used to produce steam to heat campus.

The drop of 7 percent in greenhouse gas emissions noted in the current inventory was partly due to the elimination of coal as a fuel source. Cornell used to burn 60,000 to 65,000 tons of coal per year prior to the new combined heat and power plant going online.

"2012 was the first fiscal year of no coal burned at the central energy plant," said David Frostclapp, an environmental engineer in Facilities Services who led the inventory reporting. The move away from coal was part of the university's participation in the "Beyond Coal" initiative.

The recent 7 percent reduction was also due to the fact that energy purchased by Cornell from the New York state electric grid is cleaner, meaning it is derived from fuels that produce fewer emissions. Cornell has increased production of its own electricity with upgrades to turbines in its hydroelectric plant. In addition, an energy conservation initiative led by Lanny Joyce, director of energy management in Facilities Services, includes controls and lighting upgrades in buildings and is having an impact on Cornell's carbon footprint, Frostclapp said.

"The main sources of our emissions come from commuting, business travel and electricity we buy and natural gas and other fossil fuels we burn," said Dan Roth, associate director of the Campus Sustainability Office. Frostclapp led the effort to pull together data from these sources and convert them to carbon equivalents, Roth added.

Business travel is one area that is hard to account for and must be estimated without good data for how far Cornell employees fly, for example, said Frostclapp.

Updating the plan is necessary as economics of energy and other factors change, said Roth. The next climate plan update will be released in 2014.

"This latest reduction is a significant accomplishment coming in the throes of several financially challenging years," said Kyu-Jung Whang, vice president for Facilities Services. "This result speaks to the commitment we all have to attain our climate goals and to keep the momentum rolling toward climate neutrality."

Cornell moves beyond coal with opening of new power plant