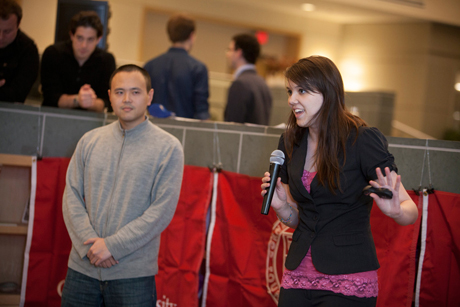 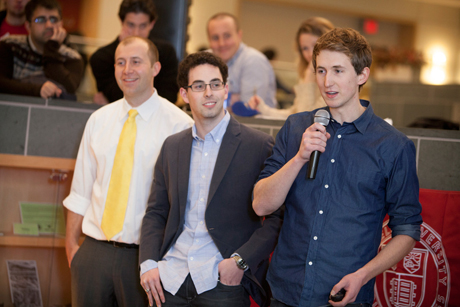 With a NASA-approved energy bar loaded with DHA omega-3 fatty acids, a company called Solar Flare beat out 11 other teams of Cornell students who pitched their business startup ideas to venture capitalists.

Based on the ABC television show “Shark Tank,” the competition challenged each team of students to present their idea in four minutes to alumni judges and to the audience of undergraduates and Samuel Curtis Johnson Graduate School of Management MBA students who filled Duffield’s atrium. The judges then asked each team questions and evaluated the team’s performance.

The People’s Choice award, selected by the audience, went to Sunn, a company that produces LED light bulbs that adjust brightness based on the light outside. The product has been shown in studies to improve people’s circadian rhythms and sleeping habits.

Solar Flare and Sunn beat out other teams that included Marshfillows, which presented their idea for a marshmallow filled with chocolate to evoke s’mores, and FiberSpark, a fiber-optic Internet service. Also competing were Pick2Pay, whose app helps users choose the right credit card to maximize rewards for purchases, and Party Headphone, whose wireless headphone system allows users to sync with any audio source up to 100 yards away for “silent parties.”

Solar Flare co-founder Diesch, a student in the College of Engineering, first had the idea for her award-winning granola bar when she entered a competition to develop a recipe for a nutritious product for astronauts in space. Diesch created an all-natural, organic granola bar containing DHA omega-3 fatty acids extracted from fish oil for improved brain function and health.

NASA approved Solar Flare’s bars and provided Diesch with a photo of her bar in space with astronauts that wowed the Shark Tank crowd and impressed judges.

“One of the biggest challenges was definitely finding a way to eliminate the fishy taste,” Diesch says, “but we developed a special process to take care of that. Now it doesn’t taste like fish at all, but you still get all of the benefits.”

Having generated and developed the product, Diesch enlisted the help of Wang and Nambiar, who worked out a business plan, including how to scale up production to produce the bars commercially. The bars are set to debut in colleges and private schools across the country in 2013 and should be in full retail production by 2018, Diesch said.

The competition was sponsored by the Entrepreneurship and Innovation Institute and the Career Management Center at Johnson, the Faculty of Computing and Information Science, College of Engineering Career Services, Cornell Engineering and Technical Career Fair team, Charles H. Dyson School of Applied Economics and Management, and Entrepreneurship@Cornell.

Maria Minkser ’13 is an intern in marketing and communications at Johnson.