Defying the widely held belief that a specific gene is the biggest risk factor for Alzheimer’s disease, two Cornell developmental psychologists and their colleagues report that people with that gene are more likely to develop mild cognitive impairment – but not Alzheimer’s.

The study suggests that older adults with healthy brain function can get genetic tests to predict increased risk of future mild cognitive impairment. However, once they are impaired cognitively, the tests won’t predict their likelihood of developing Alzheimer’s.

“Right now, genetic tests are used in exactly the opposite way. That is, healthy people don’t get the tests to predict their risk of mild cognitive impairment, but impaired people get them to predict their risk of Alzheimer’s disease,” said Charles Brainerd, professor of human development and the study’s lead co-author with Valerie Reyna, professor of human development. “So, impaired people think that tests will tell them if they are at increased risk of Alzheimer’s, which they won’t. And healthy people think that tests won’t tell them whether they are at increased risk of cognitive impairment, which they will.”

The researchers describe their findings in the January issue of Neuropsychology (27:1).

The work builds on previous research by Brainerd and associates that suggested the ε4 allele of the APOE genotype increases the risk of mild cognitive impairment as well as Alzheimer’s. 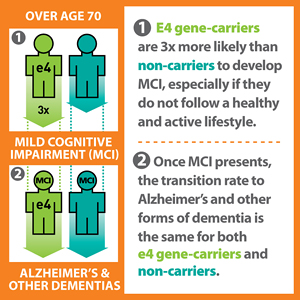 The co-authors of the paper are Ronald Petersen and Glenn Smith of the Mayo Clinic; Anna Kenney ’11, Caroline Gross ’12 and Emily Taub ’10 of Cornell – all of whom helped conduct the research as undergraduates in Brainerd’s lab; Brenda Plassman of Duke University Medical Center; and Gwenith Fisher of the University of Michigan.

The research was supported in part by the National Institutes of Health.