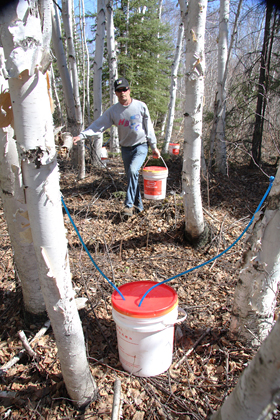 The future of sweet syrup could come from some unlikely sources: birch and walnut trees.

Thanks in part to the efforts of the Cornell Maple Program, many maple producers are starting to explore the untapped potential of walnut and birch trees, which produce sap similar to maple that can also be boiled down into syrup. Nearly 100 sugarmakers attended a recent workshop on the topic at the New York State Maple Conference in Verona.

According to Michael Farrell, director of Cornell's Uihlein Sugar Maple Research and Extension Field Station in Lake Placid, there are hundreds of millions of tappable birch and walnut trees in the eastern United States, providing a significant opportunity for a valuable forestry crop.

Birch syrup production is particularly well suited for maple producers who have already invested in the equipment and want to extend their season.

"Since the sap in birch trees doesn't start flowing until the sap flow in maples is ending in April, sugarmakers can use all of their existing equipment to produce another valuable crop of birch syrup as soon as the maple season ends," Farrell said. "And if we have a poor crop of maple syrup like we did last year, it can provide another opportunity to utilize the land. It's a way of hedging your bets against a changing climate and unpredictable weather from year to year."

In 2012, Cornell researchers tapped 400 birch trees and produced about 30 gallons of syrup. Farrell hopes to expand that to 600-700 trees over the next year and develop one of the first major research and extension projects studying the biological, technological, processing and economic aspects of birch and walnut syrup production. Their research objectives include determining optimum tapping times and collection practices; sugar concentrations; consumer preferences; the impact on lumber quality; and whether landowners could earn more from using their trees for syrup or saw timber.

It usually takes 40-50 gallons of maple sap to produce one gallon of maple syrup. The sugar content of birch sap is much lower, requiring 150-200 gallons of sap to yield a gallon of syrup.

It is, therefore, more expensive and time-consuming to produce, but it also commands a steep price: the equivalent of $350 to $400 per gallon, although it is usually sold in 8-ounce bottles in Alaska and Canada where it is produced in limited quantities.

Its intense fruity molasses flavor means birch is unlikely to replace the mighty maple as a pancake syrup, but it does appeal to creative chefs for use in marinades and other culinary treats. Farrell plans to work with a team of chefs and food scientists to create recipes.

As for walnut syrup, the delicacy could easily forge a place of honor on the breakfast table, Farrell said.

"It tastes very much like a lighter maple syrup, with nutty butterscotch overtones," Farrell said. "It has been very popular among visitors to the sugarhouse. People like it because it's different. And delicious."

Farrell is aware of only one person in the United States producing and selling walnut syrup on a commercial scale. "It's definitely something homeowners can do. I would encourage anyone with access to walnut trees to give it a try," he said.

For those with just a few birch trees, Farrell suggests drinking and cooking with the sap as they do in many European and Asian countries.

"Birch sap is basically 99 percent water, filtered by tree roots, with a slightly sweet taste and plenty of minerals and nutrients," he said.

Tapping into maple success through sanitation