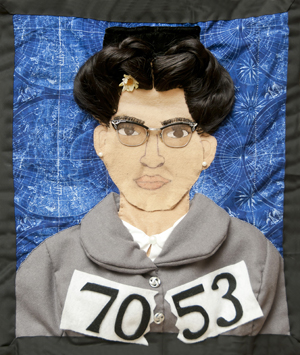 “The action of Rosa Parks, through her choice to remain seated, birthed an international movement for civil and human rights that makes it fitting to think of her not only as 'the mother of the civil rights movement,' but also as a person, a woman, who changed the world,” said Richardson, a Montgomery native. “To this day, her example brings hope and inspiration to people everywhere, including many children. When Rosa Parks sat down, American democracy moved forward. The project of freedom moved forward.”

Richardson will present a lecture titled “Rosa Parks at 100.” Richardson's art quilt, “Rosa Parks, Whose 'No' in 1955 Launched the Montgomery Bus Boycott and Was Heard Around the World,” will be unveiled and put on permanent display in the Parks Museum. A postage stamp in Parks' honor will also be presented at the event.