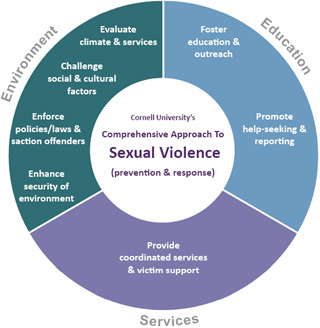 In a message to the Cornell community this week, President David Skorton drew on the recommendations he received from a team of staff and students who began meeting last fall following a series of reported sexual assaults and bias incidents on campus. Skorton noted that the university is strengthening the systems already in place to respond to incidents and broadening its focus to better address campus climate concerns and prevention strategies.

"We now need to lower the likelihood of such incidents occurring by making a deliberate commitment in how we operate to prevent sexual misconduct and all forms of bias and by focusing on how we treat each other, how we think about ourselves, and what each of us -- and all of us -- can do to foster a respectful, safe, inclusive and engaged academic environment," he said.

The Incident Management Team (IMT), formed in October 2012, was charged with assessing Cornell's sexual assault and bias resources and recommending improvements. In its report, which was submitted in December, the IMT advocated for a coordinated prevention and response approach to sexual violence in the three broad categories of education, services and environmental strategies (see chart).

These include such recommendations as offering a sexual assault prevention program during student orientation; coordinating training and educational strategies aimed at preventing and reporting sexual misconduct and bias incidents; exploring prevention strategies, including assessing and enhancing the campus culture; and increasing support for those affected by incidents of sexual misconduct and bias.

In his update, Skorton said as a first priority, he has asked the newly named Executive Committee on Campus Climate, Health and Safety -- chaired by Vice President Susan Murphy -- to develop within the next month clear response protocols for bias incidents, complementing the university's current crisis management protocols.

This "action-oriented" committee is charged with developing a campuswide framework for the delivery of services, educational outreach and training to promote a positive campus climate and prevent sexual misconduct and all forms of bias at Cornell.

In addition, the scope of the University Diversity Council, a "policy-setting" group that Skorton chairs, will "incorporate into its work on composition, inclusion, engagement and achievement a focus on the prevention of bias and sexual misconduct," as well as coordinate the assessment of campus climate.

Recommendations that already have been implemented include expanded Blue Light Phone service hours and a weekly Blue Light safety email. A sexual assault prevention program, "Speak About It," was piloted in January for new students, and similar programming is planned for next fall.

"Despite this clear progress, persistent issues on campus and continuing feedback from our community have convinced me that we have far yet to go," stated Skorton. "I call on everyone in our community to engage in self-reflection, examine the issues and join us in efforts to eliminate sexual misconduct and all forms of bias from our campus community."