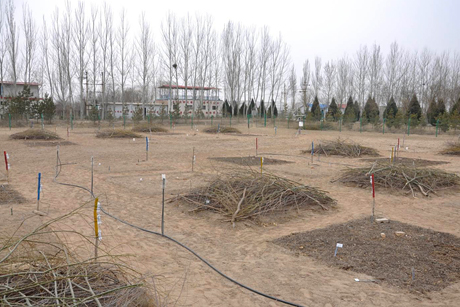 Provided
A research plot at the Ningxia Forestry Institute's State Key Laboratory of Seedling Bioengineering, where Cornell professors are demonstrating how poplar can help capture water and enhance arid soil in China.

Parched land in China has prompted Cornell environmental experts to come up with a simple solution to restore soils in arid areas, using wood chips and compost.

Led by Rebecca Schneider, associate professor of natural resources, researchers have shown that a method they developed to restore agricultural land by adding components into the upper soil layer, and collecting and retaining water to make the most of meager rainfall supplies can also contribute to soil fertility and carbon sequestration.

Schneider and her team of faculty have teamed up with Li Changxiao, a professor at the Southwest University in Chongqing, China, and a former Humphrey fellow at Cornell, in a $450,000, three-year project that the Chinese government has touted as a flagship collaboration with the U.S. Department of Agriculture (USDA).

There’s not much growing wild in the Ningxia autonomous region of northwest China; like former grasslands of the United States, Mediterranean and Africa, intensive agriculture and erosion for hundreds of years has been turning the region into a desert. Anything green that is coaxed from its parched land has been irrigated from the Yellow River, which is itself running dry. The pressure on degraded lands and disappearing waters is worsening due to rapid population growth and shifts.

“In Ningxia, China, rainfall is less than 150 mm (almost 6 inches) per year, and farmers and homeowners irrigate every single plant in order to make it grow in the sandy soils,” Schneider said. 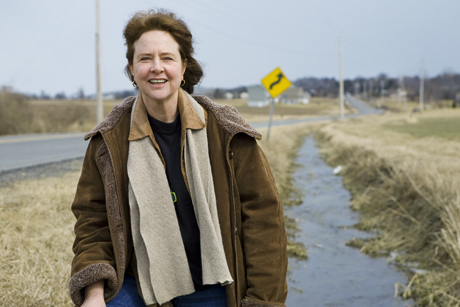 Initially designed as a research plot to allow scientists to experiment with different compost recipes, the project has been expanded into an education and extension site for policymakers and the public. Next, it will be taken into one of China’s “harmonious villages,” where hundreds of thousands of residents relocated from rural areas can learn how to apply the soil enhancement technique in their own gardens.

“Already, we’ve demonstrated that by these simple improvements to the soil, they can capture the scarce rainfall and reduce the need for constant irrigation,” Schneider said.

The work is being conducted at the Ningxia Forestry Institute’s State Key Laboratory of Seedling Bioengineering with the cooperation and guidance of director Li Jian, who was recently promoted to the Congress of the Central Committee of China.

Research is also being conducted on grasslands in North Dakota, as part of a collaboration with Mark Liebig at the USDA-Agricultural Research Service Northern Great Plains Research Lab, which was recently designated as the first long-term agro-ecosystem research center.

“We’re delighted to have found a partner organization in the United States so that we can apply the findings from our Chinese work and help restore U.S. prairie agricultural systems to their former productivity and health,” Schneider said.