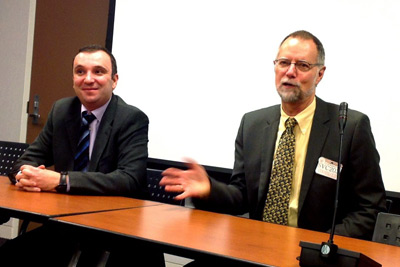 Jennifer Koons
Professors Antonio Bento, left, and Robert Frank urged the government to enact a carbon tax while they were in Washington, D.C., March 1.

Instituting a tax on carbon dioxide emissions won't just benefit the environment but could play a pivotal role in the nation's economic recovery, said two Cornell economists at a policy briefing for lawmakers and a luncheon for members of the media, both in Washington, D.C., March 1.

Charging emitters of greenhouse gases, such as power plants and industrial facilities, for each ton of carbon dioxide they emit could reduce the deficit and drive development of alternative sources of energy, said the economists, who are both affiliated with Cornell's Atkinson Center for a Sustainable Future.

"There is a window of opportunity to justify the carbon tax not only from the perspective of getting the levels of reduction in carbon that are desired but also as a deficit reduction tool," said Antonio Bento, associate professor in Cornell's Charles H. Dyson School of Applied Economics and Management.

That window is now, according to Bento and Robert Frank, the Henrietta Johnson Louis Professor of Management at the Samuel Curtis Johnson Graduate School of Management.

"Even just a very symbolic tax now with an understanding that there should be major increases over time is what we need, because continuing to use arguments that we have a lot of uncertainties on the damages and we might disagree on whether the social cost of carbon is $15 or $35 [per ton] should not be justification not to do anything now," Bento said. "If we don't do anything now, many scientists have shown that we could pass the tipping point and enter another phase of the climate cycle. And the costs of acting then would be much, much higher."

Frank cited as a model for success the economic constraints imposed more than a decade ago to greatly reduce acid rain emissions from power plants.

"The reason there was too much [sulfur dioxide] in the air is that it was free to put it there. We needed to make people pay for the right to put it there. And so was born the proposal to have a tradable permit system for sulfur dioxide," Frank said. "Finally, that was adopted as one of the amendments to the Clean Air Act, and in the wake of that change, the problem was solved in a fraction of the time that everybody said it was going to take and about one-eighth the total cost."

He added: "Rich firms pollute because it's cheaper than filtering the stuff out. When you charge them for it, they filter them out. It works. It's so easy."

Both Frank and Bento believe that focusing on the economic incentives is the way to bring regulators around to a carbon tax proposal.

"The idea that regulators have learned the benefits of market-based instruments makes me much more optimistic that this will move forward," Bento said.

Taxpayers, as well, may find reason to support the proposal if they can get something back in return.

"One of the concepts we've been putting forward here is that it gives you an opportunity to actually cut other taxes that could foster economic growth," Bento said. "If you could all of a sudden reduce the rate on capital taxes, I do believe you may actually get supporters from places that otherwise wouldn't. And the same thing for the payroll tax."

Frank and Bento's policy briefing was sponsored by the Atkinson Center. The media lunch was part of a series held in New York City and Washington, D.C., that feature experts from Cornell discussing high-profile issues.