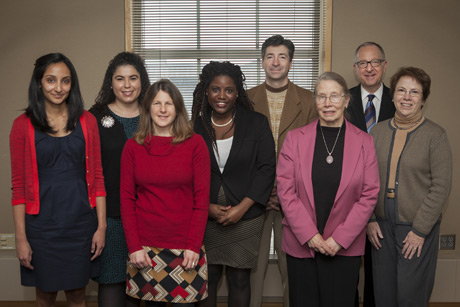 Eight Cornellians received Constance E. Cook and Alice H. Cook Recognition Awards Feb. 28 for their contributions to improving the climate for women at Cornell. The awards were presented by President David Skorton and the recipients' nominators at a recognition luncheon at the ILR Conference Center.

The awards are granted by the Cook Award Committee and the University Diversity Council and are selected from nominations by members of the Cornell community.

Susan Henry, professor of molecular biology and genetics, who as dean of the College of Agriculture and Life Sciences, was responsible for equalizing the gender pay gap in her college, appointing several female department chairs, and conducting faculty searches that considered women as readily as men.

Betsy Hillman, who served as the dual career consultant for the Recruitment and Employment Center for over a decade before her retirement. She has been instrumental in successful coordinating dual career faculty hires and for recruiting women faculty.

Robert Raguso, professor of neurobiology and behavior, who served as chair of the faculty and graduate student team that envisioned a symposium spotlighting the research and achievements of women in the life sciences. The symposium spotlighted eight inspiring and pioneering women life scientists and was attended by more than 300 people.

Cynthia Reinhart-King, associate professor of biomedical engineering, who co-founded her department's Graduate Women's Group to encourage women to pursue careers in science and which mentors women through various organizations.

Tracy Stokol, associate professor of clinical pathology, who served as chair for the Vet College's Committee on the Status of Faculty Women. The committee evaluates issues of importance to women faculty and provides advice on courses of action, including initiatives on career development.

Elizabeth Wayne, who as a Ph.D. student in the field of biomedical engineering is committed to mentoring women students. She also helped organize the Northeast Conference for Undergraduate Women in Physics.

The awards are named for Constance Cook, Cornell's first woman vice president, and Alice Cook (no relation to Constance), one of the first women faculty members at the ILR School. Both were early advocates for women at Cornell.