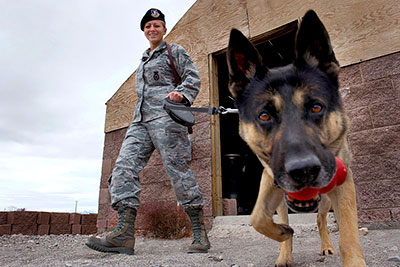 From sniffing out bombs and weapons to uncovering criminal evidence, dogs can help save lives and keep the peace. Now, researchers have uncovered how to improve dogs' smelling skills through diet, by cutting protein and adding fats.

Such a diet, say the researchers, appears to help dogs return to lower body temperatures after exercise, which reduces panting and, thereby, improves sniffing.

The findings could change how detection dogs are fed and boost their detection abilities, says Joseph Wakshlag, associate professor of clinical studies and chief of nutrition at Cornell's College of Veterinary Medicine. Wakshlag, who collaborated with researchers at Auburn University, is presenting the findings at the Companion Animal Nutrition Summit in Atlanta, held March 22-24.

The study, funded with a $1 million grant from the U.S. Department of Justice, also found that detection dogs are more reliable detectors than previously thought. The study is the first to be conducted in the world's only detection dog research facility designed in conjunction with a military dog trainer. The Alabama facility, which provides expert detection dogs to police and military forces, flushes out fumes between tests, ensuring a fresh field each time.

"Previous studies from other facilities, which lack this feature, had suggested detection dogs signaling for suspect substances are about 70 percent accurate," said Wakshlag. "The lower numbers may have been due to study design flaws which our new study overcame. Dogs tested in the new facility signaled with 90 percent and above accuracy. We also found we can push detection performance even further with the right kind of food."

"Corn oil has lots of polyunsaturated fats, similar to what you'd find in a lot of nuts and common grocery store seed oils," said Wakshlag. "Past data from elsewhere suggest that these polyunsaturated fats might enhance the sense of smell, and it looks like that may be true for detection dogs. It could be that fat somehow improves nose-signaling structures or reduces body temperature or both. But lowering protein also played a part in improving olfaction."

Wakshlag designed the high-performance and corn-oil diets to have the same amount of energy from fat (57 percent). But the corn oil diet had less protein: 18 percent compared with 27 percent in the regular and high-performance diets.

"If you're a dog, digesting protein raises body temperature, so the longer your body temperature is up, the longer you keep panting, and the harder it is to smell well," said Wakshlag. "Our study shifts the paradigm of what 'high-performance' diet can mean for dogs. It depends on what you want your dog to do. A sled dog or greyhound may need more protein to keep going. But detection dogs tend to exercise in shorter bursts and need to recover quickly and smell well. For that, less protein and more fat could help."

Carly Hodes '10, MBA '14, is a communication specialist at the College of Veterinary Medicine.