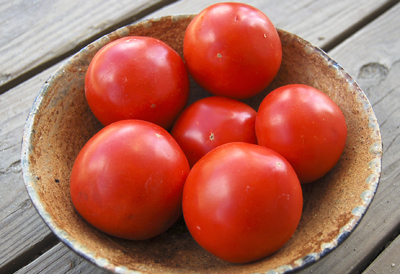 Iron Lady is available to both producers and home gardeners for the upcoming growing season.

However, since those plants could still be defoliated by Septoria leaf spot, Mutscher-Chu worked with research associate Stella Zitter and plant pathologist Tom Zitter to create Septoria resistance.

"We have demonstrated that we have tomato hybrids with good medium fruit that will stand up to these diseases," Mutschler-Chu said. "In order to reduce the need for fungicides, you need to genetically control all three diseases."

Iron Lady, the cross of a "triple resistant" Cornell line and a late blight/early blight line from North Carolina State University, is the first of these hybrids to become commercially available, via High Mowing Organic Seeds. In addition to the strongest possible resistance to late blight -- provided by the combination of two genes, Ph2 and Ph3 -- tolerance to early blight and resistance to Septoria leaf spot, the plant also has resistances to verticillium and fusarium wilts, common to most modern tomato varieties.

Early blight tolerance is not as strong as resistance, so the need for fungicides may not be completely eliminated. But Mutschler-Chu teamed up with professor Tom Zitter to identify a complementary fungicide strategy with the lowest possible environmental impact. This led to a potential reduction of sprays from weekly application to once or twice a season. That information is available to growers via Cornell's Vegetable MD website.

Iron Lady is suitable for organic production, and was tested by organic farmers as part of a federal Organic Agriculture Research and Extension-funded project coordinated by Cornell breeder Michael Mazourek. He said disease-resistant tomatoes were identified as a top priority for organic growers, who currently use copper to control blight, a solution that can be just as bad for the environment as chemical fungicides.

"This represents a really valuable tool for growers," Mazourek said. "And the tomatoes are head and shoulders above those you would find shipped to the grocery store."

Mutschler-Chu said she wanted to make Iron Lady available to growers quickly because of the real and immediate need. "We have even better lines coming along," she said. "We are testing second-generation hybrids now."

While breeding the new lines, Mutschler-Chu and her team created molecular markers that can be used to detect the presence of Ph2 and Ph3 in plants. "Use of markers cuts in half the number of generations it takes to breed," she said. "Development of a similar marker for the Septoria resistance gene is nearing completion."

Mutschler-Chu is sharing her discoveries with scientists and seed companies, so that the resistance traits can be incorporated into other varieties.

This project was supported in part by a New York Specialty Crop grant.