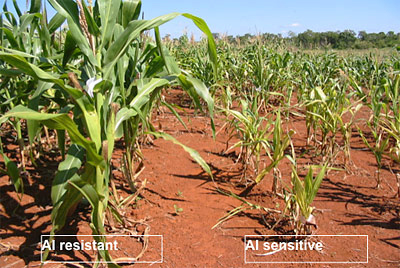 Provided
This image shows aluminum-tolerant corn on the left and aluminum-sensitive corn on the right in test plots in highly acidic soil in Brazil.

In this effort, when plant scientists searched the maize genome for clues as to why some plants can tolerate toxic aluminum in soil, they found three copies of the same gene known to affect aluminum tolerance, according to new USDA/Cornell-led research.

Acidic soils dissolve aluminum from clays in the soil, making it toxic to plant roots in half the world’s arable lands. The MATE1 gene, which was found in triplicate in aluminum-tolerant maize, turns on in the presence of aluminum ions and expresses a protein that transports citric acid from root tips into the soil, which binds to and locks up aluminum, thereby preventing it from harming roots.

“We found three functional copies that were identical,” said senior author Leon Kochian, director of the U.S. Department of Agriculture – Agriculture Research Service (USDA-ARS) Plant, Soil and Nutrition Laboratory at Cornell. “This is one of the first examples of copy number variation contributing to an agronomically important trait.”

He added that the extra gene copies had a cumulative effect of coding for more protein that transports aluminum-binding citric acid into the soil.

The study, “Aluminum tolerance in maize is associated with higher MATE1 gene copy number,” appeared online March 11 in the Proceedings of the National Academy of Sciences.

The finding points to the importance of looking for multiple copies of a gene for higher expression of certain traits. “This could be a key factor for other traits of agricultural importance,” said Kochian.

The research came out of a long collaboration on aluminum tolerance with Embrapa Maize and Sorghum in Brazil, which provided the aluminum-tolerant maize germplasm where the 3-copy allele was discovered. Lead author Lyza Maron, a senior research associate at the Boyce Thompson Institute for Plant Research at Cornell, also collaborated with researchers at the University of Florida, Gainesville, the University of Missouri, Arizona Genomics Institute and Cold Spring Harbor Laboratory to verify the finding. By sequencing the genomic regions that harbor the MATE1 gene in aluminum-tolerant and aluminum-sensitive plants, she found a similar MATE1 allele (version of a gene) in both types of plants. But when she examined copy number variation, she found the aluminum-tolerant plant had three copies, while the intolerant plant had only one copy of the MATE1 allele.

“[Copy number variation] is well documented in the human genome,” Kochian said, “and maize does a lot of this, so there are probably many examples” of gene copy numbers affecting traits, he concluded.