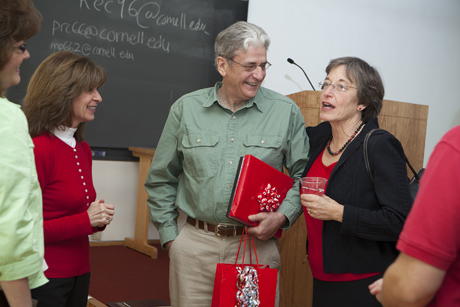 At two events, Emily Sampson, an administrative assistant who has worked for the Institute for Biotechnology and Life Science Technologies since 2008, and Bill Alberta, associate director for Career Services until his retirement in 2012 and creator of the Cornell Elves Program, were recognized April 23 with a George Peter Award for Dedicated Service.

Sampson had known she would receive a certificate recognizing her for five years of service when her department gathered in the Biotechnology Building. But she was taken by surprise when her parents, Russ and Judi, and boyfriend Greg Kehoe walked into the meeting along with members of the Employee Assembly (EA), and EA Chair Tanya Grove presented her with the George Peter award.

Mary Opperman, vice president for human resources and safety services, recounted that one of Sampson’s nominators had described how Sampson had simultaneously taken on the responsibilities of two colleagues on maternity leave in addition to her own. 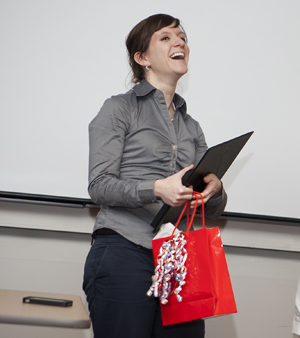 Linda Carr, executive director of the institute, said Sampson is “absolutely tremendous with everything she does.” In her nomination letter, Carr described how Sampson works with “enormous grace,” “a positive team-player approach” and a “can-do attitude.”

Sampson’s supervisor, Jocelyn Rose, director of the institute, described how Sampson seamlessly moves between different aspects of her job, coordinating many of the center’s programs and lectures, serving as a “wonderful representative” to off-campus visitors and calmly dealing with any request she is given.

And Susi Varvayanis, a director in the Center for Life Science Enterprise, said that Sampson is “one in a million,” noting that “nothing ever falls through the cracks.”

Now retired, Alberta was asked to return to campus to lead a session on volunteering for the Bring a Child to Work program. As the session closed, approximately 60 friends, former colleagues and Alberta’s wife, Sherry, and daughter Amber joined the session to honor Alberta for founding and leading the Elves Program.

Grove presented Alberta with the George Peter Award for Dedicated Service, and Opperman read a letter from President David Skorton. “Although I’m unable to attend your celebration, I will be with you in spirit as many Cornellians gather to thank you for all you’ve done,” Skorton wrote. “The Elves Program, which you initiated in 1989 and have nurtured through 23 years of tremendous growth, today provides more than 900 children with clothing and toys each holiday season. Though many volunteers are essential to this effort, it is your leadership – even after your retirement from Cornell – that has been most crucial. … I am grateful for your years of dedicated service as a Cornell staff member and for your superb example of volunteer leadership.”

Several Elf leaders spoke of Alberta’s influence on their lives. For instance, Brigid Beachler, a managing director in the ILR School, said that Alberta “has been a fantastic mentor for me,” and Valerie Kelly, administrative assistant in the College of Human Ecology, has spread participation in the Elves Program throughout the town of Moravia.

Vice President Susan Murphy applauded Alberta’s work in Career Services, where he was known as “Mr. Information Man,” while Graduate School Dean Barbara Knuth spoke to Alberta’s advising skills and being a role model of the values of community and engagement.