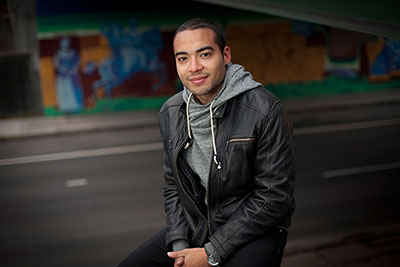 Described by Cornell faculty in English as a major literary talent with great career potential, Andrew Boryga ’13 has been selected the Undergraduate Artist of the Year for 2012-13, the Cornell Council for the Arts has announced.

The award presentation is April 25 at 5 p.m. in Lewis Auditorium, Goldwin Smith Hall. Boryga will read from his short story “The Numbers,” winner of the Creative Writing Program’s George Harmon Coxe Award in 2011 and published in The Susquehanna Review.

Copies of the story will be distributed at the event, which will include a conversation with Helena Viramontes, professor of creative writing in the Department of English.

Born and raised in the Bronx, N.Y., the setting of all of his published fiction, Boryga began writing at age 16, starting with features for local newspapers and eventually moving on to three consecutive summer internships with The New York Times, where he published more than 20 articles on topics ranging from local politics, the arts and hip-hop to one piece on a peacock escaping from the Central Park Zoo.

After taking a creative writing course in his sophomore year at Cornell, he fell in love with fiction and devoted himself to the craft.

Boryga’s fiction is partly autobiographical and offers an unsentimental glimpse of life through the eyes of youth quickly coming of age in a complex, hostile and often neglected environment. His stories capture the ambivalence, absurd humor, casual violence and emotional turmoil of lives restricted by poverty and inner city life, and touches upon subjects such as sexuality, ethnicity, education, law enforcement and contradictory societal norms.

His fiction has been published in The Susquehanna Review, The North Central Review and The Cornell Daily Sun. In addition to the Coxe Award, he received the Arthur Lynn Andrew Prize for fiction from the Creative Writing Program in 2011.

Professor of English Stephanie Vaughn, who nominated Boryga for the award, said: “We in creative writing have every reason to believe that Andrew Boryga will become a new important voice in American fiction, doing for his Puerto Rican neighborhood in the Bronx what Junot Díaz has done for the New Jersey neighborhood known as London Terrace – giving voice to a largely invisible, sometimes caricatured community operating on the ragged edges of an urban neighborhood, where the poor live only minutes from the rich, but the minutes seem like light years.”

The Cornell Council for the Arts presents the annual citation and monetary award of $1,000 to an outstanding undergraduate student in the arts who has demonstrated talent and dedication, and has realized notable achievements in one or more artistic disciplines while at Cornell.