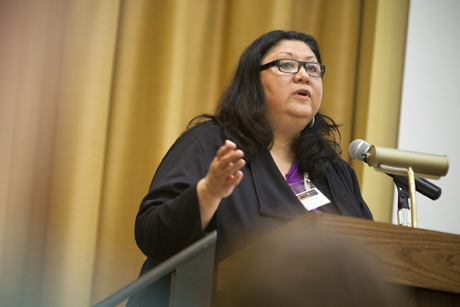 From the earliest native students on campus to a current broad mission encompassing student recruitment and retention, an academic curriculum and extension, the American Indian Program (AIP) reflected on its history at Cornell as it celebrated its 30th year.

The program’s 30th Anniversary Recognition and Two Row Wampum Renewal Conference, April 12-13, featured native community leaders, scholars, program alumni, faculty and administrators. AIP Director Jolene Rickard said it was the first of three key events, with a focus on reciprocity during native alumni Reunion events in June, and on reclamation and renaming the program in the fall.

“The AIP recognizes that Cornell is located within the homelands of the Cayuga people, and part of our larger mission is to educate the community about this and to encourage the students to practice reciprocity,” Rickard said.

The program “rose from the red power movement” in the late 1960s and early 1970s, she said. By 1977, 17 native students were enrolled at Cornell. Dean David Call, answering a 1981 proposal to establish AIP, offered to house it in the College of Agriculture and Life Sciences, with tenure-track faculty, a senior extension associate (Ron LaFrance), and undergraduate and graduate concentrations. A residential center, Akwe:kon, opened in 1991.

More work was to be done after the program was established.

“Cornell had had indigenous students since the 1930s and 1940s,” AIP alumna Rebecca Moore, Ph.D. ’02, said via Skype in her presentation, “Akwe:kon in Mohawk Means All of Us,” a case study of AIP and “how ‘the people’ contributed to the program.”

An indigenous student survey and a conference in 1999 informed AIP’s mission statement and strategic goals: social change; program restructuring, recruitment and retention; outreach; resource generation; bridging the gap with the academy; and strengthening links with a national advisory council and alumni.

“We achieved an academic identity and a program identity,” Moore said.Cornell anthropologist Davydd Greenwood offered applied research on AIP as an institutional model for cooperative interdisciplinary work that thrives as a grassroots organization within Cornell’s complex administrative structure.

“At this university, we do research on hugely dynamic, complicated problems that cannot be tackled by a single discipline,” Greenwood said. “Indigenous studies pose just such a problem. … We looked at finding a way to reconnect all the stakeholders around AIP.”

He said positive administrative reform and having a mission were among important factors in “a success story that deserves to be told.”

CALS Senior Associate Dean Max Pfeffer said AIP helps Cornell fulfill its land-grant mission of inclusion, is committed to ensuring its students’ needs and interests are met, and “serves as a champion, working through its ‘full circle’ approach to education, to help create a holistic framework that promotes the academic success, cultural expression and personal growth of Cornell’s students.”

Cornell has offered admission this year to 41 self-identified indigenous students across 13 majors, Pfeffer said. CALS and AIP are developing strategies to attract more Native American students to the college, with targeted recruitment and new interdisciplinary majors such as environmental sciences and sustainability.

Indigenous globalization and current advocacy, education and environmental preservation initiatives were among issues discussed at the conference, which ended with a Haudenosaunee social on North Campus.