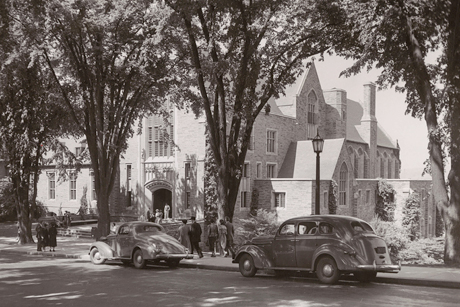 Division of Rare and Manuscript Collections
Willard Straight Hall in the 1940s.

Since his freshman year, John Mueller ’13 has found a lot to love about singing with Last Call, a student a cappella group. It’s creative and social. It builds friendships and leadership skills. It connects him to college crooners on campus and beyond.

“A cappella is a quintessential college ‘thing,’” he explains. “It’s a cultural staple. It’s an incredible subculture.”

But finding right-sized performance spaces on campus with audiovisual equipment at a price student groups can afford?

Enter an anonymous donor and the Class of 1950 to aid student performance groups by supporting upgrades to the 340-seat Little Theatre at the garden level of Willard Straight Hall. The upgrades will allow the theater to host live performances in addition to serving as the main venue for Cornell Cinema.

“Soon students from across the performing arts will have access to a midsized performance venue with the proper equipment in place so they can focus on the show rather than worry about the finances and logistics,” Mueller says. “Its central location is an advantage as well because it’s close to both Collegetown and West Campus.”

In recent years, members of the Class of 1950 have taken a backstage – though crucial – role in making improvements to several spaces within Willard Straight Hall. Their generosity stemmed from an unexpected windfall on their class balance sheet, and they stepped forward to contribute about $500,000 for renovation projects, among them new floors for the Memorial and Garden rooms.

Class council member and former trustee Nelson Schaenen ’50 says his class wanted to respond to priorities in the dean of students’ office for infrastructure upgrades. When Schaenen and his classmates attended Cornell in the post-WWII years, the Straight was more than 20 years old and the student population had soared in growth. “Meet you at 8 at the Straight!” was a common refrain.

“It was a true student union and the center of social life and dining on campus,” Schaenen said, “especially for students who were not members of the Greek system.”

Most recently, Schaenen and his classmates have worked closely with Kent Hubbell, the Robert W. and Elizabeth C. Staley Dean of Students, to fund the first phase of improvements to the theater through upgrades to the stage, electricity, lighting and more. The improvements will be completed in time for the beginning of the 2013-14 school year.

“We fight for space every semester,” explains Mueller, who is executive vice president of the Student Assembly and served as Last Call’s president for two years. “With a large number of stages unfit for performance or overly large for our needs, student groups end up shelling out literally thousands of dollars to rent speakers, lights and microphones. We even hired an electrician for some of our performances to run extra power into the lecture hall at Kennedy Hall.”

“I’m moved by the generosity of the Class of 1950,” Mueller says. “I look forward to coming back to the Straight and seeing all that they have done for the space.”