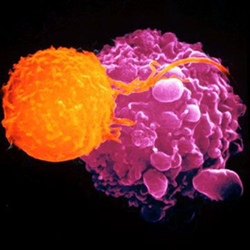 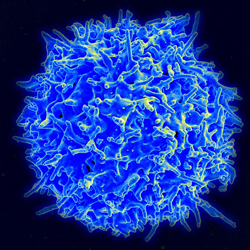 Immune cells in newborns appear to be more ready to do battle than previously thought. New Cornell research shows that small populations of preprogrammed immune cells can fight specific pathogens that they have never encountered. The findings, say the researchers, have the potential to revolutionize how and when people are immunized.

The study, published in the March issue of the Journal of Immunology, demonstrates a way to grow these cells, potentially transforming our approach to preventing infectious disease.

When first exposed to a new pathogen, the immune system takes up to a week to effectively respond, and up to a month to make specialized memory cells that remember how to fight it. The next time a body is exposed, these memory cells take care of it within hours. Scientists had thought memory cells only developed after exposure, but Avery August, professor of microbiology and immunology, and his lab had discovered small pre-existing (innate) populations in 2008. Their defensive potential was unknown until the latest study found they act exactly like memory cells that learn from exposure.

“These fully functioning innate memory cells open amazing opportunities for improving how we immunize,” said August, chair of the Department of Microbiology and Immunology at Cornell’s College of Veterinary Medicine, who oversaw the study. “We’ve found a way to make millions of working memory cells without ever having to expose the body to a pathogen. If we can mobilize these cells to our advantage we can immunize much more quickly and eliminate the rare side effects of traditional vaccines.”

Vaccines work by stimulating immune cells to “remember” a pathogen. For example, by exposing the body to a particular strain, a vaccine helps the immune system learn to respond to it. Making memory cells directly could eliminate that learning curve, letting people bypass booster shots and some slower-acting vaccines, August said. People going abroad could get immunizations the day before they travel instead of weeks in advance.

Our bodies normally have about 100 memory cells at birth, according to August’s past research, but need about 100,000 to defend against the average invader. Using bone marrow chimeras, a specialized transplantation technique, the researchers were able to make 10 million. The study focused on memory cells designed to attack Listeria monocytogenes, bacteria that cause food poisoning, but August believes the model could be expanded to boost defenses against other infectious diseases.

“Theoretically we could generate memory cells for any kind of pathogen,” said August. “It looks like our immune systems are already trying to do this. The existence of these premade memory cells suggests that, over evolutionary history, our immune systems are trying to anticipate the pathogens we’ll face. Now we’ve found a way that could quickly help them along to improve immunities.”

Carly Hodes '10, MBA '15, is a communication specialist at the College of Veterinary Medicine.