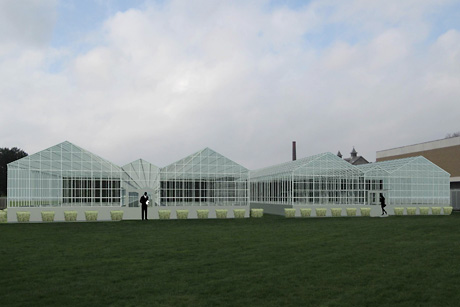 O'Brien & Gere
Renderings of the greenhouses to be reconstructed at the New York State Agricultural Experiment Station in Geneva, N.Y.

Agricultural research at Cornell will get a big boost, thanks to a $4.7 million investment in greenhouses at the university’s New York State Agricultural Experiment Station (NYSAES) in Geneva, N.Y.

The two-year project, funded by money released by Gov. Andrew Cuomo, will reconstruct 21,000 square feet of greenhouses at NYSAES, which were built during the mid-1950s to the early 1970s. Construction is expected to begin in May 2013 and will transform the greenhouses into much-needed, state-of-the-art facilities.

“The critical research being done today in Geneva requires state-of-the-art greenhouse facilities that can only be achieved through modernization and expansion,” said Thomas Burr, the Goichman Family Director of the New York State Agricultural Experiment Station and associate dean of the College of Agriculture and Life Sciences.

“Innovations pioneered in the greenhouses will translate to tangible products that have positive economic impacts on New York. For example, many fruit and vegetable farms in south central New York are family-run operations that sell directly to their customers through pick-your-own, farmers markets, farm stands and community-supported agricultural programs,” Burr added.

Modernization of the greenhouses will also improve educational opportunities for more than 50 graduate and undergraduate students who use the facilities, as well as outreach programs designed to engage elementary and high school students.

“The investment that we helped secure will promote regional, long-term job development and create more private sector jobs, a win-win for our local community and economy,” said Nozzolio. “Working with Governor Cuomo, we were able to secure this important funding and we thank the governor for his continued support of the experiment station and agricultural research in our state.

“We extend our special thanks to President David Skorton, College of Agriculture and Life Sciences Dean Kathryn Boor, New York State Agricultural Experiment Station Director Tom Burr and the faculty, staff and students of Cornell University for their strong support as we fought to secure this important funding,” Nozzolio added. “I look forward to working with Cornell University as we continue our efforts to grow jobs here in the Finger Lakes.”

“In many ways, agricultural innovation begins in the controlled environment of research greenhouses,” Kolb said. “Cost-saving practices, disease- and pest-resistant crops and valuable new plant varieties developed as a result of this project will help New York farms compete in the global, regional and local markets that characterize today’s agricultural economy.”

The legislators also secured funding for a $3.3 million, 6,800-square-foot facility for Finger Lakes Community College’s viticulture program at the Cornell Agriculture and Food Technology Park. It will include classroom and laboratory space, as well as a teaching winery and a crush pad, with a small vineyard nearby. The contract for this project was also recently completed and plans for construction are under way.