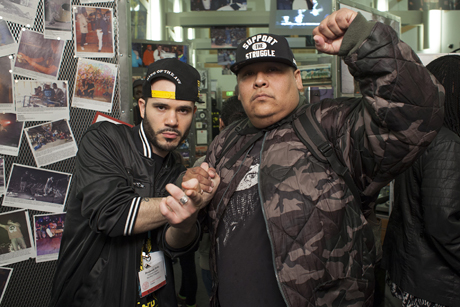 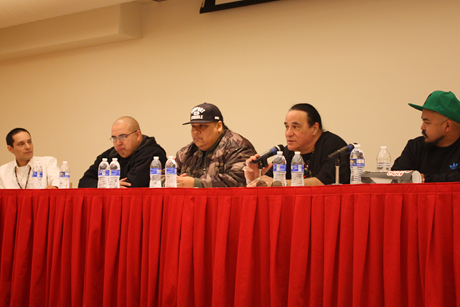 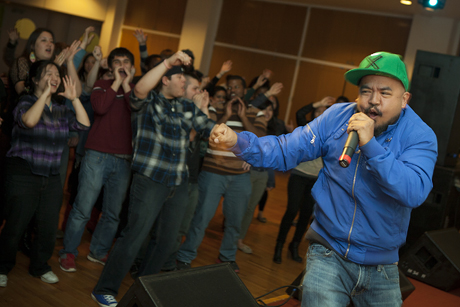 Contrary to popular belief, the roots of hip-hop extend far beyond the South Bronx in the 1970s and into indigenous culture throughout history.

Hip-hop reaches back to the origin of communication, said Ernie Paniccioli, a Cree hip-hop photographer known as Brother Ernie, at an April 6 panel discussion.

“Hip-hop was ancient vibes; tribes did not have DJ sets, but they had drums,” he said. “Now these ancient vibes are coming back to us.”

Paniccioli was joined in the “Unbound from the Underground” panel discussion by Filipino MC Jack DeJesus (aka Kiwi) and Native American hip-hop artists Darrell Leighton (aka Double Barrel Darrell) and Christopher Ross (aka Prophecy), both of the band Antithesis.

It was one of several events in connection with the launch of “Now Scream!,” a new exhibition highlighting the Cornell Hip Hop Collection, which features thousands of recordings, photographs, flyers and other hip-hop memorabilia, most of it dating from 1977-1985. Events in downtown Ithaca included performances by Cornell Visiting Scholar Afrika Bambaataa and Wu Tang Clan’s GZA, three days of mural painting by graffiti artists, and related exhibitions at the Tompkins County Public Library and the History Center.

The panelists spoke of indigenous communities today that are embracing “modernized” hip-hop to pass traditions and knowledge to future generations, and about the diversity of cultures that use hip-hop to communicate.

Kiwi said he grew up in Los Angeles with gang violence and stark racial divides within his community. For him, hip-hop served as an outlet to advocate for equality.

“At first, I thought hip-hop only talked about the African-American community, but the Filipino community also struggles. Once I realized I was politicized in my own community, I had something to rap about,” Kiwi said.

“It seems that today parents are afraid of their children,” said Prophecy. “But I can speak the youth’s language through my music.”

“Hip-hop artists can use their music to inspire and preserve traditional values, relearn culture and solve problems that have stemmed from historical imperial domination,” Wiley said.

“If your mind is free, nothing can enslave you,” Paniccioli said. “If we all understand how interconnected we really are, and give thanks to life itself, we can have a brighter future.”

The event was a work of multicultural collaboration. Wiley, co-chair of Native American Students at Cornell and a student employee with the American Indian Program, organized it alongside La Asociacion Latina, Movimiento Estudiantil Chicano/a de Aztlán, Asian and Pacific Americans for Action and the Cornell Asian and Pacific Islander Student Union.

“The goal of this event is to engage meaningfully with cultural communities at Cornell,” Wiley said. “We want to expand mutual understanding and bring artists who can speak to some of the experiences of these communities.”

Students need not look far to understand indigenous culture, he said. Cornell resides on the homeland of the Cayuga people, one of six nations of the Haudenosaunee Confederacy. The American Indian Program will commemorate and celebrate its 30th anniversary with a two-day conference April 12-13.

Alex Koeberle ’13 is a student writer for the College of Agriculture and Life Sciences.