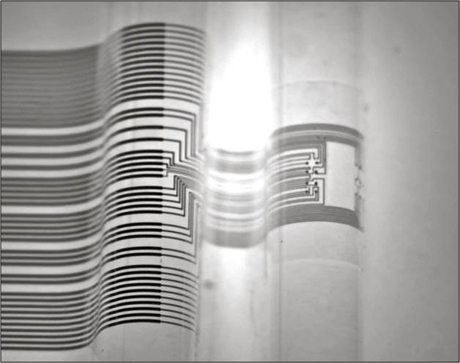 Department of Bioelectronics, Ecole des Mines
This micro transistor can now obtain high-quality amplification and brain-signal recording better than ever before. A French scientific team used the Cornell NanoScale Science and Technology Facility to develop the prototypes.

To make better mind maps, a group of French scientists – building on prototypes developed at the Cornell NanoScale Science and Technology Facility (CNF) – have produced the world’s first microscopic, organic transistors that can amplify and record signals from within the brain itself.

Helping patients and doctors alike, this is a substantial, 10-fold improvement in signal quality compared with current electrode technology.

High-quality recordings of brain activity – challenging at best – need to be carefully amplified, but today’s amplifiers are bulky and placed outside the skull, where the signal degrades. These new biocompatible, microdevices are flexible enough to go inside the brain and follow the curvilinear shape of the brain surface.

To develop the prototypes, the scientists used the CNF lithography and characterization suite of tools – which validates never-before-used concepts. The staff’s experience converted initial designs into real devices quickly.

“To understand how the brain works, we record the activity of a large number of neurons. Transistors provide higher-quality recordings than electrodes – and, in turn, record more neuronal activity,” said George Malliaras of the Microelectronics Center of Provence, France, and a lead author on the research. “The CNF prototyping allowed us to skip having to reinvent the wheel and saved us precious time and money.”

The study, “In Vivo Recordings of Brain Activity Using Organic Transistors,” was published in Nature Communications, March 2013.The System Neuroscience Institute, Marseille, France, and Microvitae Technologies, Gardanne, France, also contributed to the research. The CNF facility is funded by the National Science Foundation.