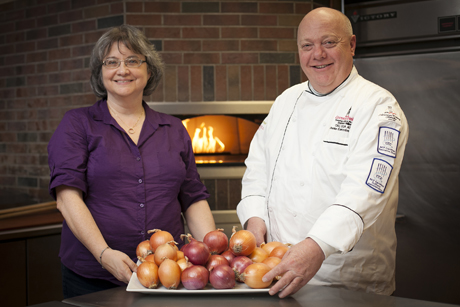 Cornell researchers have developed new mild onions that will have chefs crying – tears of joy. Twelve years in development and with a couple years of testing to go, researchers say it will be just a few years before the mild locally grown onions are available to the public.

“These onions have a longer shelf life and still produce huge flavors; I see them as being a consumer’s dream,” said Steve Miller, Cornell Dining senior executive chef, who with a Wegmans supermarket executive chef has tested about a dozen of the experimental onion hybrids.

In general, current mild onions are watery and soft due to low sugar content (called low brix), which leads to a short shelf life and makes them mushy when cooked. Longer-lasting pungent onions are higher in sugar and caramelize when cooked, but reducing their bite requires more cooking, which also softens them.

The new Cornell onions “have the initial aroma and flavor of a mild onion, but they have a lot less water,” said Mike Washburn, executive chef at Wegmans. As result, they have a longer shelf life and stay crisper and intact when cooked in soup or chili or when grilled.

Martha Mutschler, professor of plant breeding and genetics, developed the mild onion lines and used the results of the chefs’ tests to inform selection of the three new hybrids of mild onions that were in expanded trials last year.

Before any of the testing could be done, Mutschler and colleagues developed onion populations that combined low pungency and higher brix traits. Some of these lines were then developed with conventional breeding methods, including a mild line that has red bulbs and can be used to produce red or pink mild onion hybrids. Also, in collaboration with Elizabeth Earle, professor of plant breeding and genetics, other lines were developed with a “double haploid” process using a tissue culture of immature onion flowers that duplicates one set of chromosomes to speed up breeding. The doubled haploid mild onion lines are unique in that they are totally inbred: “The seeds from each double haploid plant will produce identical plants” that are extremely uniform for any traits, said Earle.

Currently, Mutschler is coordinating three phases of the project: She has  worked with Bejo Seeds Co. to develop hybrids adapted to New York state; she and Cornell Cooperative Extension associates Maire Ullrich, Judd Reid and Christy Hoepting worked with New York onion growers to field test the experimental hybrids; and Mutschler worked with executive chefs for culinary tests to determine potential marketing of the new onions. These phases are interrelated as seed companies and growers need to know consumer interest in the product before they take the risk of investing in producing a new crop.

“I think it’s certainly encouraging,” said Washburn. The new onion has the potential for being “a superior quality product but grown locally and sustainably, which is a key draw of [Wegmans’] customer base,” he added.

Gifts from New York onion growers have partly funded Mutschler’s program, while a grant from the New York Farm Viability Institute supported 2012 trials. The onion technologies are managed by the Cornell Center for Technology Enterprise and Commercialization.