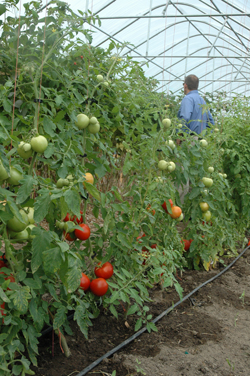 “A tomato can look perfectly fine, but when you cut into it at harvest you discover the unseen problem that foliar testing would have alerted you to in time to take corrective measures,” Reiners said.

“High tunnel growers have a big financial investment in their tunnels, which have a high potential for profitability if they manage fertility well. These demonstration trials with foliar testing help growers to ‘see’ fertility and what they can do to manage it throughout the growing season to produce higher yield and higher income,” said Willsboro Farm Manager Michael H. Davis.

“Our goal is to get more growers to commit the time to season-long testing as an investment in improving their crop yield, quality and income,” said Reid.

Without testing to direct their response, approaches currently used by growers to combat nutrient deficiencies can be costly, often insufficient and sometimes too late.

Ivy worked with one tomato grower who relied only on early season soil tests that indicated sufficient nutrients, but did not use regular testing throughout the growing season only to realize too late that a deficiency had developed later in the season.

“He suffered a heartbreaking loss of a large part of his tomato crop to interior white-wall disorder caused by potassium deficiency,” she said. “A foliar test too late in the season confirmed the lack of potassium, but it was too late to save the crop.”

The study also evaluated the use of fertigation to effectively supply the needed nutrients.

The study was funded by the Cornell University Agricultural Experiment Station and the farmer-driven Northern New York Agricultural Development Program (NNYADP), which also sponsored daylong workshops as part of the project.

Ivy says that some growers who attended the workshops indicated a desire for training in how to set up and manage irrigation for vegetable crops, and others are now considering how to add fertigation systems to their farm businesses.

The researchers report on their research in the “Managing Fertility to Increase Yield in Vegetables” project report, which is on the NNYADP website under Horticulture.

The total farm gate value for vegetables grown in the six northernmost counties – Clinton, Essex, Franklin, Jefferson, Lewis and St. Lawrence – exceeds $11 million annually. In those counties, vegetable acreage has increased 38 percent and the number of vegetable farms is up 60 percent since 2002.