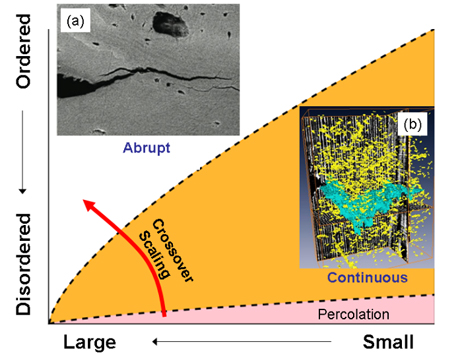 Shattering a glass is a completely different experience than breaking a seashell, and Cornell physicists offer a notion – at the microscale – to explain why.

A new, unified theory of fracture is detailed in a Physical Review Letters paper published April 29, with senior author James P. Sethna, professor of physics, graduate student Ashivni Shekhawat, and Stefano Zapperi of CNR Milan. The paper was selected by the journal as an “Editor’s Choice.”

Glass, say the researchers, is a “clean” system that breaks abruptly in one nucleated event when the weakest spot fails. But materials like bones, seashells and composites, called disordered media, can have multiple microcracks that form and grow before the final failure. The researchers provided a universal scaling theory for this distributed damage that explains fundamentally why these types of materials break so differently.

Previous theories had held that a phase transition separates abrupt fracture in clean systems like glass, and fracture with substantial distributed damage, like bone.

The Cornell scientists instead offer the theory of a smoother crossover between abrupt fracture at low disorder (glass), and accumulation of distributed damage at high disorder (seashell), using universal scaling functions. Bones, seashells and modern composite materials are tougher than glass because of this phenomenon of distributed damage. The researchers show how disorder leads to damage for small systems, and catastrophic crack nucleation at longer length scales.

The paper is titled “From Damage Percolation to Crack Nucleation Through Finite Size Criticality.” The work was supported by the Department of Energy.