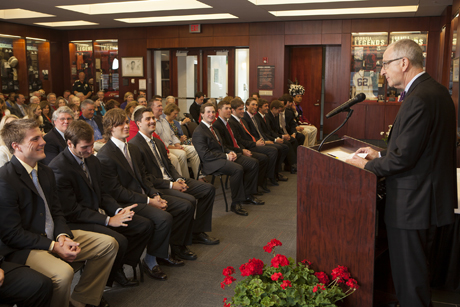 Robert Barker/University Photography
After returning from the NCAA Final Four tournament, graduating seniors from the 2013 men's lacrosse team receive their diplomas from President David Skorton at the Hall of Fame Room in Friends Hall.

After an extraordinary season culminating in a return to the NCAA Final Four, the graduating seniors on the men’s lacrosse team – which had missed Cornell Commencement May 26 by playing in the tournament over the weekend – received their diplomas May 28 at a special ceremony at the Hall of Fame Room in Friends Hall. 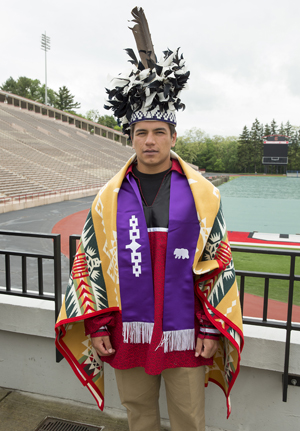 Patrick Shanahan/Cornell Athletics
After the graduation ceremony, Myan Adams displays his "gustoweh" made from feathers and his clothing for special occasions.

Cornell President David Skorton provided the 16 graduating seniors with a personalized, ESPN recap-style of his 19-minute Sunday speech. Skorton and Susan Murphy, vice president for student and academic  services, told the new graduates how they remained up-to-date in the exciting, waning minutes of the Cornell-Duke game – even while the administrators were otherwise engaged with Graduation Weekend events.

“I want you to know how much the Cornell family is proud of you and your accomplishments,” Skorton said.

Skorton and each respective dean – Alan Mathios of Human Ecology, Peter Lepage of Arts and Sciences, and Kathryn Boor of Agriculture and Life Sciences – gave each graduate a diploma.

Of special note, Adams received his diploma in special dress of the Mohawk tribe. On his head, he wore a “gustoweh,” made from ruffled feathers and topped with three eagle feathers. Also, he wore a purple and white ribbon draped over his shoulders, with symbols depicting the Iroquois Confederacy and his Bear clan.