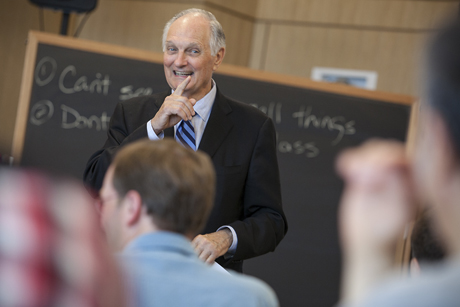 Lindsay France/University Photography
Alan Alda talks to scientists about effective communication during a May 22 workshop. 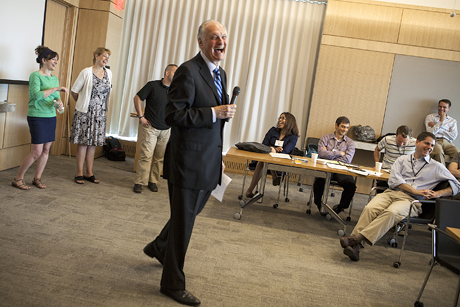 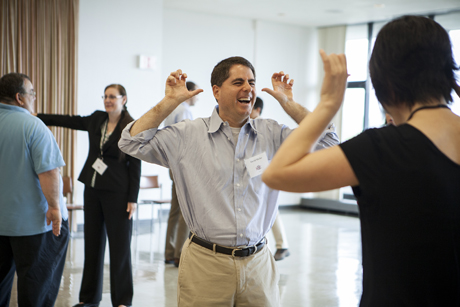 Lindsay France/University Photography
David Muller, professor of applied and engineering physics and co-director of the Kavli Institute at Cornell for Nanoscale Science, participates in an improvisation exercise that requires partners to mirror each other's movements. 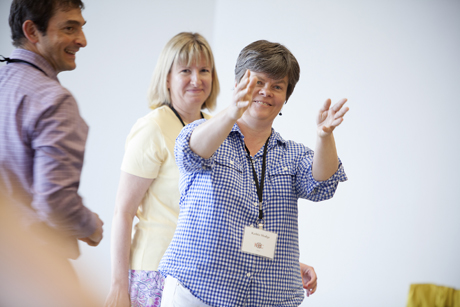 To some, the sports section of a newspaper is incomprehensible gibberish – kind of like the way people talk in Hollywood, Alan Alda told a roomful of Cornell scientists May 22.

Visiting campus May 21-24 to offer science communication workshops hosted by the Kavli Institute at Cornell for Nanoscale Science, Alda implored participants to skip the jargon and instead tell stories and make personal, emotional connections. He and staff from the Alan Alda Center for Communicating Science at Stony Brook University, who led two workshop tracks for about 50 Cornell faculty members, brimmed with ideas on helping them help the public understand science. The center offers improvisation training designed especially for scientists – but not the comedy improv seen on television.

“We’re not turning scientists into actors and certainly not into comedians,” Alda said. “The thing that improvising does for them is it enables them to become accustomed to, and happy about, making personal contact with the people they’re playing these improvised exercises and games with.” This translates to comfort with an audience, he said.

Stony Brook staff members Lydia Franco-Hodges and Valeri Lantz-Gefroh guided groups through exercises that required the scientists, for example, to gesture widely, role-play and share personal stories. The exercises are meant to enhance skills like paying attention to other people, anticipating and meeting their needs, reading their reactions, and taking responsibility for delivering a clear message.

Tanzeem Choudhury, associate professor of information science, said “making connections to people and emotions can be very, very effective” in describing what she does, she said. “That’s the part I’m really liking.”

Day 1 of the workshop opened with David Muller, professor of applied and engineering physics and co-director of Cornell’s Kavli Institute, sharing the abstract of a recent paper about a sheet of glass just two atoms thick. Guided by Alda and Howard Schneider, co-chair of the center, the scientists teased out what they perceived to be Muller’s main points while trying not to use words like “spectroscopy” and “ab initio.”

Then, the kicker: In walked three pre-selected “regular people” – Bea Brockner, a finance worker at Cornell Cooperative Extension; Tracy Davenport, administrative coordinator of the Physical Sciences Building; and Billy Kepner, marketing coordinator at Cornell Plantations. The scientists’ challenge: to clearly present the research to the three.

Some tried to explain why the arrangement of atoms in glass is “random.” That didn’t really work.

“Sometimes the obstacles are not clear until you try them out,” remarked Steve Strogatz, the Jacob Gould Schurman Professor of Applied Mathematics, after the event. “I thought saying ‘random’ would be helpful, but then it became clear that ‘random’ was not really the essence of [the story].”

Others struggled to describe how the thin glass was made (a kind of spray-painting with atoms) or why the researchers would do such a thing in the first place (it was an accidental discovery). Davenport asked: “So if you accidentally created this, how do you accidentally do it again?”

The scientists learned that it was easier to talk about how the atoms in glass look like a liquid frozen in time, yet behave like a solid, Muller said.

“This is a beautiful moment,” Alda said at the conclusion of the exercise. “You kept pushing for ways [to explain] that were common to all of us – imagery, words, affect. You let emotion come in … Keep in mind how hard it was to do this … and how much it was worth doing.”

The workshops and a public lecture by Alda were supported by the Kavli Foundation, as well as the Cornell Center for Materials Research and the Energy Materials Center at Cornell.

Alan Alda: Science shouldn't be like a blind date