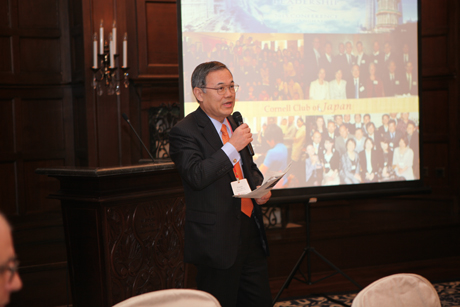 Provided
Chiaki Tanuma, MPS '80, a Cornell trustee and president of the Cornell Club of Japan and of the Cornell Hotel Society Japan, speaks at the Cornell Asia-Pacific Leadership Conference in Shanghai.

The conference, sponsored by the Division of Alumni Affairs and Development, was held this year in conjunction with the Cornell International Summit, co-presented by the College of Architecture, Art and Planning (AAP), the School of Hotel Administration (SHA) and the Cornell Hotel Society Asia Pacific Regional Meeting.

This year’s thematic program, “Cornell International Summit: Hospitality, Real Estate and the Built Environment,” was opened by Zhao Wen, vice mayor of Shanghai. She addressed Cornellians as well as local industry and government leaders on the important role Cornell and Cornellians play in regional development and prosperity.

In keeping with the university’s strategic emphasis on the region, the Asia-Pacific Leadership Conference has gradually expanded its reach each year since it began. The first event, spearheaded by alumni leaders in Hong Kong in 2007, drew approximately 20 of the region’s most committed volunteers. Subsequent events took place in Singapore (2008), Seoul (2010), Beijing (2011) and Hong Kong (2012). More than half of all Cornell alumni residing outside North America make their homes in the Asia-Pacific region.

Hongnan Ma ’01 is director of international programs in the Division of Alumni Affairs and Development.