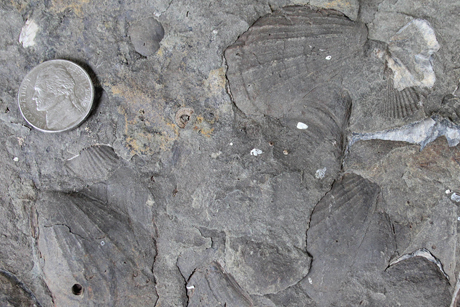 Provided
Clam fossils from the Devonian Sea, which are now found in the Finger Lakes region of New York, bear the scars from attackers some 380 million years ago.

Clam fossils from the middle Devonian era – some 380 million years ago – now yield a better paleontological picture of the capacity of ecosystems to remain stable in the face of environmental change, according to research published today (May 15) in the online journal PLOS ONE.

Trained to examine species abundance – the head counts of specimens – paleontologists test the stability of Earth’s past ecosystems. The research shows that factors such as predation and organism body size from epochs-gone-by can now be considered in such detective work.

Back 380 million years ago, New York was under the Devonian sea. Today, the fossils found in the rocks of this region have become well-known for documenting long-term stability in species composition – that is, the same species have been found to persist with little change over a 5 million-year period. But research has found that species abundance in this ancient ecosystem went up and down, generating debate among paleontologists about whether the fauna, as a whole, was also stable in terms of its ecology.

A team of Cornell, Paleontological Research Institution (PRI) – an affiliate of Cornell – and University of Cincinnati researchers revisited this debate by examining the ecological stability of the Devonian clam fauna. 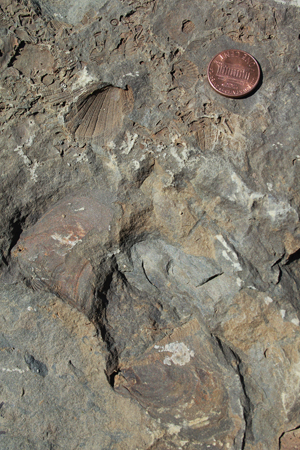 Provided
Clam fossils from the Finger Lakes region of New York bear the scars from attackers some 380 million years ago.

“To understand how these species fared in the Devonian, you have to look at how they interacted with other species. There is more to ecology than just the abundance and distribution of species,” said Gregory Dietl, Cornell adjunct professor, earth and atmospheric sciences, and a paleontologist at PRI.

The research, “Abundance Is Not Enough: The Need for Multiple Lines of Evidence in Testing for Ecological Stability in the Fossil Record,” was written by Judith Nagel-Myers, paleontologist, PRI; John Handley, PRI; Carlton Brett, University of Cincinnati professor of geology; and Dietl.

The scientists took a new approach to testing ecological stability: In addition to counting numbers of clams, they examined repair scars on fossil clams that were left by the unsuccessful attacks from shell-crushing predators, and the body size of the clam assemblage as it yields biological information on the structure of food webs.

“Surprisingly, predation pressure and the body-size structure of the clams remained stable, even as abundance varied,” said Nagel-Myers. Possible mechanisms that explain the clam assemblage’s stability are related to the dynamics of food webs – the same mechanisms operating in food webs today. In one mechanism, predators switched between feeding on different clam species as their abundance varied.

The ancient Devonian ecosystem was more complex than previously thought, as it cautions scientists against basing conclusions on a single factor. “Our results thus raise serious doubt as to whether ecological stability can be tested meaningfully, solely based upon the abundance of species, which has been the standard metric used to test for ecological stability in paleoecology,” Dietl said.