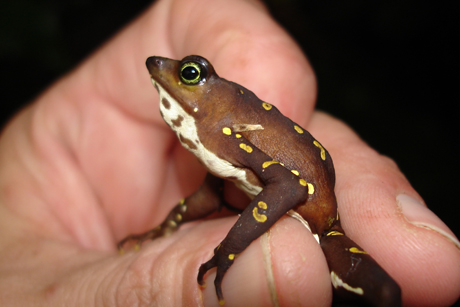 K.R. Zamudio
Harlequin frogs, such as this species (Atelopus glyphus), are highly susceptible to Bd, and many populations have become extinct.

A fungus that has decimated amphibians globally is much older than previously thought, but may have recently spread through the global wildlife trade to new locations where amphibians have no immunity, reports a new study.

Previous research had suggested that a group of related strains of the fungus Batrachochytrium dendrobatidis (Bd) responsible for the current global pandemic, called the Global Panzootic Lineage (GPL), resulted from a recent lethal hybridization.

But now, an international team of researchers, including Cornell ecologist Kelly Zamudio, one of the project’s principal investigators (PI), has sequenced the genomes of 29 strains of the Bd fungus worldwide.

The results are published in the May 6 issue of the Proceedings of the National Academy of Sciences.

The findings reveal that the GPL existed long before the current pandemic, possibly descending from an ancestor that originated 26,000 years ago. 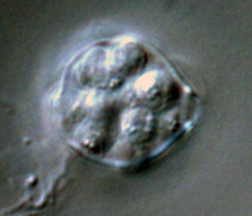 E.B. Rosenblum
The amphibian-killing fungus (Batrachochytrium dendrobatidis) forms zoosporangia in the skin of infected frogs and develop zoospores that are released into the environment and infect other frogs.

“We found a lot more genetic variation than people knew about,” said Zamudio, professor of ecology and evolutionary biology, of the sequenced Bd genomes. “It could lead us to a better understanding of what makes it kill. Once we know the genetic makeup of a pathogen, maybe we can understand what makes it such a powerful killer.”

The fungus infects some 350 amphibian species by attacking and degrading their skin, often causing death. Amphibians began dying off at alarming rates in the 1980s, particularly in Australia and South America, and researchers identified Bd as the culprit in 1998.

In the study, a sample from Brazil showed the earliest known divergence from that common ancestor.

“Early on in the history [of Bd], the Brazil isolate took a different evolutionary path,” said Zamudio.

With the genome sequenced, researchers may now begin to pick it apart and understand which genes are more or less active in causing disease.

Though more work is needed, the researchers found variations in genes that secrete peptidases, enzymes that break down proteins, such as skin proteins.

The fungus also has the ability to duplicate certain parts of its genome, but not others, and this replication is greater in the most virulent isolates found in Panama and Costa Rica, where amphibian declines are leading to extinctions.

With the new genetic data, scientists can focus on what recent environmental changes may have played roles in making the pathogen more virulent to its hosts in places where it is endemic and areas devastated by the GPL.

The study provides an example of how modern tools commonly used to understand human diseases may be applied to issues of biodiversity and conservation, she added.

The study was funded by the National Science Foundation, Cornell Center for Comparative Population Genetics and the Atkinson Center for a Sustainable Future.