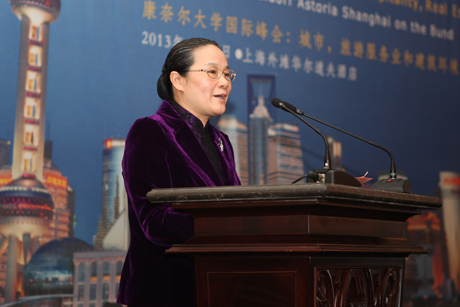 Provided
Zhao Wen, vice mayor of the city of Shanghai, speaks at the Waldorf Astoria Shanghai on the Bund April 20.

The future lies in China’s emerging middle class, concluded particpants at the Cornell International Summit: Hospitality, Real Estate and the Built Environment, at the Waldorf Astoria Shanghai on the Bund April 20.

This growth is pushing Chinese domestic hotel companies to build brands and is driving international companies to bring brands to China. The emerging middle class is also spurring a dramatic increase in the number of hotel rooms in the country.

“Currently, there are about 2.5 million hotel rooms in China. We will see this number expand beyond the 5 million or so in North America to about 7.5 million in a decade,” said Leland C. Pillsbury ’69, co-chairman and CEO of Thayer Lodging Group. “The implications for real-estate development around that are enormous.”

Many hotel executives on the program confirmed that China is the fastest growing region for their brands. They also explained how future progress will differ from past development; today, companies are planning significant growth in secondary and tertiary cities and are focusing on three- and four-star properties. Historically, international brands have been successful in China’s luxury segment, while domestic companies have succeeded in the budget sector.

Teddy Zhang ’97, president and CEO of HUBS1, moderated a panel on the future of the Chinese hotel marketplace and explained: “One of the very successful investments in the lodging industry is the budget sector. This is the first truly domestic hotel group in China that can grow and compete with international brands.”

During the panel on urban interconnectedness, moderator Kent Kleinman, the Gale and Ira Drukier Dean of the College of Architecture, Art and Planning (AAP), noted that more than 50 percent of the world population already lives in cities. A sustainable future will mean fundamental changes in the ways cities and buildings are designed and how density is managed. Michael Manville, assistant professor of city and regional planning, noted that new technologies can fight traffic congestion; and Jenny Sabin, assistant professor of architecture, described her work applying biology and mathematics to the design of material structures.

Half of the 275 summit attendees were Cornell alumni, and 14 faculty and staff attended from across the university; the conference included 39 speakers.

“The diversity of stakeholders who participated in the summit allowed us to look at China’s development and urbanization from many different angles,” said Michael D. Johnson, dean and E.M. Statler Professor at the School of Hotel Administration (SHA). “Our expert panelists discussed everything from the concerns of international versus domestic companies to how consumer preferences are changing, to the ways technology improvements in transportation and building design will redefine the cities of the future.”

The summit – which was co-presented by the SHA, AAP and Cornell’s Center for Real Estate and Finance – was held in collaboration with the Cornell Asia-Pacific Leadership Conference and the Cornell Hotel Society Asia Pacific Regional Meeting.

The next Cornell International Hospitality Summit will be held in São Paulo, Brazil, in 2014.

Ashlee McGandy is a staff writer at Cornell’s School of Hotel Administration.