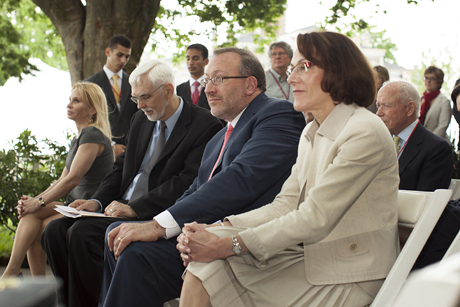 Cornell administrators and donors broke ground May 23 for Klarman Hall, the first new building for the humanities on central campus since Goldwin Smith Hall opened in 1905.

The building will address space needs in humanities departments of the College of Arts and Sciences. Seth ’79 and Beth Klarman, who supported the project, attended the groundbreaking ceremony, which was led by President David Skorton and Peter Lepage, the college’s Harold Tanner Dean.

In his remarks, Seth Klarman quoted from sources of inspiration ranging from Ezra Cornell to Apple founder Steve Jobs, and called Cornell “a place of education and experience, challenge and personal growth, friendships and collaborations. … I’m grateful to have this opportunity to give back.” 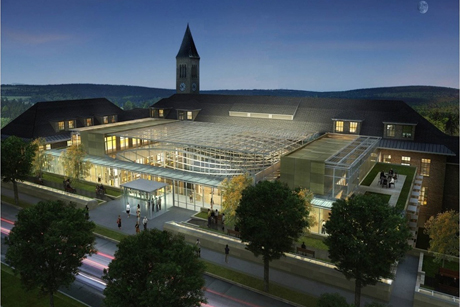 Koetter, Kim and Associates
An architects' rendering of the Klarman Hall atrium at night.

The $61 million building project is being funded entirely by philanthropy. The Klarman Family Foundation provided the lead gift, with additional support from the Groos family (in honor of Richard Groos ’52, B.M.E. ’53) and other major donors. The building’s official name is the Seth ’79 and Beth Klarman Humanities Building.

Located between Goldwin Smith Hall and East Avenue, Klarman Hall will serve as a gateway to the Arts Quad when it is completed in 2015. Its central atrium will be a crossroads for students and faculty from all over campus. The building design is by the Boston architecture firm Koetter, Kim and Associates, which also designed the Physical Sciences Building; the firm’s principals are Alfred Koetter, M.Arch. ’75, and Susie Kim ’71, B.Arch. ’72.

The building will connect with Goldwin Smith and will offer 33,250 square feet of usable space including offices, work spaces and classrooms for the College of Arts and Sciences, which has more than 200 humanities faculty. Other facilities include a 350-seat auditorium, a large café and other informal gathering spaces.

A transparent glass façade will allow views of the rotunda inside Klarman Hall’s atrium from the Physical Sciences Building, Rockefeller Hall, the East Slope Lawn and East Avenue.

Klarman Hall’s 7,700-square-foot, transparent atrium will be covered by a glass roof and an environmental sunshade, both designed to provide optimal daylight and energy performance year-round. A green roof will reduce storm water run-off, minimize the building’s heating and cooling needs and create a garden atmosphere for an elevated terrace with outdoor tables. The building is expected to receive a LEED Platinum rating.

Humanities building to be gateway to Arts Quad