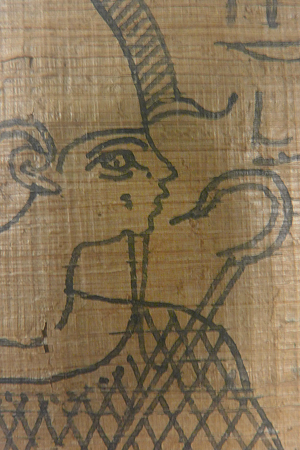 Division of Rare and Manuscript Collections
A segment of the papyrus on display.

In 1889, Andrew Dickson White’s extensive travels found him in Cairo, where he purchased an 8-foot-long papyrus scroll found in an ancient tomb. A museum conservator told White it was Spell 125 from the “Book of the Dead,” a traditional Egyptian funeral text.

White shipped it to Ithaca and, trusting his account, no one translated the scroll after it arrived in the library’s archives – until now, when a collections assistant in the Division of Rare and Manuscript Collections (RMC) examined it carefully.

Fredrika Loew ’12, a Near Eastern studies and archaeology major who knows hieroglyphics and began as a student assistant in RMC, consulted with her colleagues and found something odd about the text. 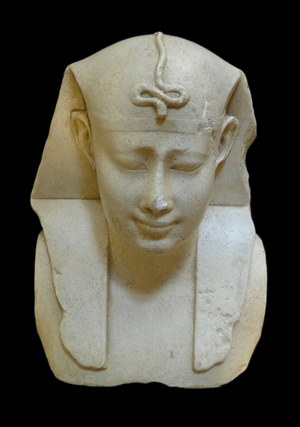 Division of Rare and Manuscript Collections
A statue of the head of a king on exhibition.

“It’s written in hieratic, the hieroglyphic equivalent for papyrus, and it’s clear from the drawing that it has something to do with death and burials,” Loew said. “But when I looked at it carefully, the words didn't seem familiar.”

Loew was right: The scroll turned out to be a unique funerary text. It quotes parts of the “Book of the Dead,” but, as far as scholars know, it is an original text from the Ptolemaic period and dates to around 330-320 B.C.

With Thomas Christiansen, a hieratic scholar in Denmark, Loew is working to understand the text. She, Christiansen and Caitlin Barrett, assistant professor of classics, are also co-authoring a book about the papyrus.

The papyrus belonged to a Ptolemaic priest named Usir-Wer, and it describes what will happen to his body and soul (or “ba”) after death. Part of it reads:

“They will take your ba to the sky and they will take your corpse to the Duat. They will place the cloth of the southern and northern house on your mummy like the follower of Sokar, whom you made into one of the vigilant ones who are watching over the lord, the great god. ... Your ba will appear in a chamber of white gold. Royal linen will descend on your mummy bandages.”

Loew created an RMC exhibition around the papyrus – and several other Egypt-related artifacts from the Herbert F. Johnson Museum of Art and the library, as well as items from the Department of Anthropology's collections – that will be open until June 15 in the Kroch Library rotunda. The display includes mummified birds, an amulet, a kohl jar and an 1824 book deciphering hieratic and hieroglyphics from the Rosetta Stone. Also on display are White's photographs from his travels in Egypt, including the excavation of the Sphinx.

Gwen Glazer is the staff writer/editor at the Cornell Library.