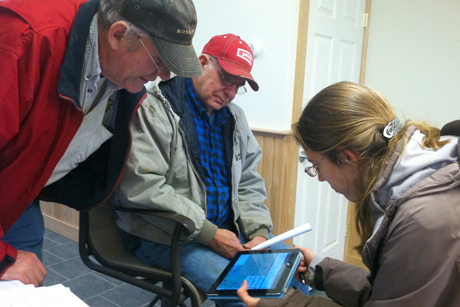 Provided
Farmers Robert and Rodney Donald review the Adapt-N tool with Cornell extension associate Bianca Moebius-Clune. They saved thousands of dollars after applying Adapt-N recommendations during a trial at their Moravia farm.

A new tool helps farmers feed crops only as much as they really need.

The free Web-based tool, Adapt-N, draws on local soil, crop and weather data – including high resolution climate data stored at the Northeast Regional Climate Center at Cornell – to provide better estimates of nitrogen fertilizer needs for corn, in real time, throughout the season.

Tested for nearly two years in Iowa and New York and introduced in 2012 to Illinois, Indiana, Minnesota and Wisconsin, about 600 users now receive daily alerts text or email alerts as part of the system. Adapt-N was chosen as AgProfessional’s 2012 Readers’ Choice Top Product of the Year, taking 52 percent of the vote and being the first product developed by a university to receive the award.

About $5 billion is spent every year on nitrogen fertilizer for corn crops. About half of the nitrogen, however, is lost to the atmosphere as nitrous oxide or leached through the soil where it can pollute groundwater or cause “dead zones” where the water has too little oxygen to sustain marine life. A greenhouse gas that is 300 times better at trapping heat than carbon dioxide, nitrous oxide emissions from nitrogen fertilizer use rival the global warming impact of the entire U.S. aviation industry.

It’s in everyone’s best interest that farmers apply only as much nitrogen as is needed, but determining that figure is complicated, say the developers, an interdisciplinary team of Cornell’s Departments of Crop and Soil Sciences and of Earth and Atmospheric Sciences.

Nitrogen needs can vary widely from field to field, depending on what has grown in the field, what will be grown, whether manure was applied and when. They are also fickle, changing throughout the growing season. Nitrogen accumulates in the soil in early spring, but the plants don’t begin to use it until much later in their growth cycle. If it rains a lot in between, the nitrogen can be washed away and not available when the plants really need it.

Relying solely on recommendations at the beginning of the growing season is dangerous, but most farmers do just that, often applying more than might be necessary as it’s cheaper to buy the extra fertilizer than risk losses in yield.

The real-time nature of Adapt-N recommendations can help farmers save the environment, and their bottom line, says extension associate Bianca Moebius-Clune, who worked with soil science professor Harold van Es and senior research associate Jeff Melkonian to develop the product. The tool helped farmers save an estimated $200,000 in 2012 by reducing fertilizer use on approximately 7,500 acres of land, she said.

In an early trial on a 1,500 acre corn and soybean farm in Moravia, N.Y., for example, farmers followed Adapt-N recommendations on a 10-acre strip of a 100-acre field, applying 80 pounds of nitrogen per acre instead of the 220 pounds per acre they applied to the rest of the field. There was no loss in yield; had the rest of the farm followed the Adapt-N recommendation, they would have saved approximately $70,000 in fertilizer, and reduced their nitrogen leaching losses by about 77 percent.

With results like that, interest in the product is skyrocketing, with more than 200 people participating in a national webinar in March, Moebius-Clune said. Plans are afoot to further refine the Adapt-N simulations to incorporate soil health indicators and cover crops, she said.

“There’s such a huge potential for positive environmental and economic impact,” said Moebius-Clune. “You can make more money and save the environment too, how cool is that?”