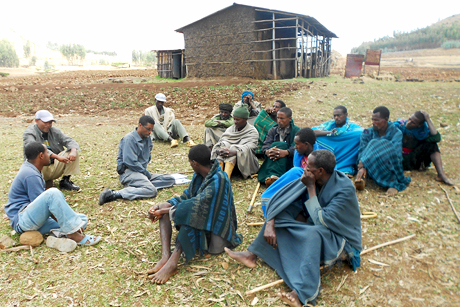 Provided
Semagn-Asredie Kolech, left-center, doctoral candidate in horticulture, poses with a group of Ethiopian farmers after surveying their practices.

With unpredictable annual rainfall and drought once every five years, climate change presents challenges to feeding Ethiopia. Adapting to a warming world, the potato is becoming a more important crop there – with the potential to feed much of Africa.

Semagn-Asredie Kolech, a Cornell doctoral candidate in the field of horticulture, studies the potato and bridges the tradition of Ethiopian farming with the modernity of agricultural science.

He shuttles between Ethiopia and Ithaca to examine and research efficient agricultural practices in the shadow of climate change. “The potato is a good strategy crop for global warming. It has a short growing season, it offers higher yields, it’s less susceptible to hail damage, and you can grow 40 tons per hectare. With wheat and corn, you don’t get more than 10 tons a hectare,” Kolech says.

Ethiopia sits on the brink of thriving financial and gross domestic product forecasts, as its government formally merges green economics with climate-change resilient policies. But the country’s agricultural economy suffers from poor cultivation practices and frequent drought. However, new efforts – including Kolech’s research – are beginning to fortify the country’s agricultural resilience, reducing the threat of starvation and bringing on the rising possibility of exporting potatoes to other African countries.

Annually, Ethiopian farmers plant potatoes in the spring and late summer. Yet, they still search for optimum planting dates and vie for vibrant drought-tolerant varieties if planted in the short-rain season, and sidestepping late blight, if planted in the longer rainy season.

At an Atkinson Center for a Sustainable Future forum in March, Kolech presented preliminary research gathered last summer. He surveyed Ethiopian farmers in potato-growing regions to understand their varietal inventory and crop practices. Farmers tried new varieties, but they often reverted back to using their traditional cultivars, he said. For example, in the Shashemene district (southern Ethiopia) about 47 percent of farmers used new varieties before 2012. That percentage dropped to 17 percent willing to use new varieties in 2012. Further, he found that in the Yilmana district, the use of new varieties dropped to 15 percent last season, down from 35 percent prior to 2012.

Kolech said that he found that the usage drop-off is due mostly to poor storage quality. New varieties have good attributes, such as high yield and late blight resistance, but in northwestern Ethiopia where more than 40 percent of potatoes are grown, the potato color and taste changes in storage earlier than the local varieties.

To hedge bets on drought or late blight, Kolech found the farmers revert to traditional varieties in the Shashemene district to alleviate food shortage. This summer, he will continue to survey farmers and collect the local cultivars for genetic diversity analysis, and then test these varieties for drought-stress tolerance.

The environmental and economic prospects for Ethiopia are so intriguing, this June five Cornell faculty members – David Wolfe, horticulture; Donald Halseth, horticulture; Walter DeJong, plant breeding and genetics; Fouad Makki, development sociology; and Tammo Steenhuis, biological and environmental engineering, will travel with Kolech to Ethiopia to meet with potential government and nongovernmental collaborators. Their travel will be funded by Cornell’s Atkinson Center for a Sustainable Future and a collaborative CARE-Cornell Impact through Innovation Fund.