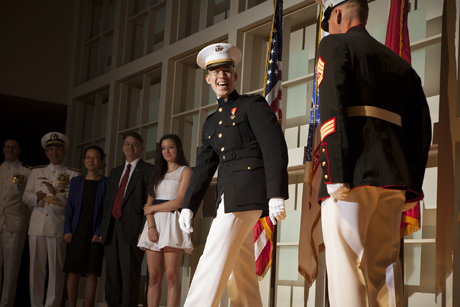 Lindsay France/University Photography
Nathaniel Lowry smiles after his first salute at the ROTC commissioning ceremony in Statler Hall May 25. 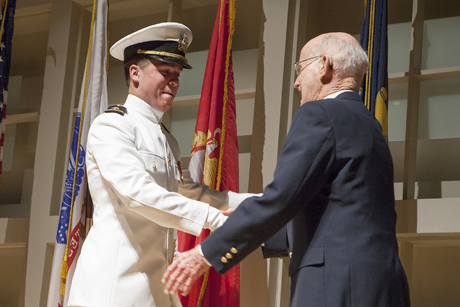 Lindsay France/University Photography
Nicholas Johnson shakes his grandfather's hand after receiving his first salute from him at the ROTC commissioning ceremony in Statler Hall May 25. 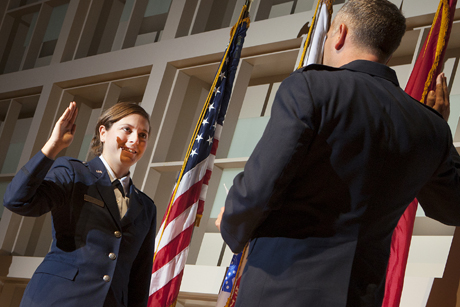 Lindsay France/University Photography
Carissa Bartlett receives her oath of office from her father at the ROTC commissioning ceremony in Statler Hall May 25.

A stirring rendition of “The Star-Spangled Banner” by assistant director of admissions Talyse Hampton set the tone of the May 25 ROTC Joint Service Brigade Commissioning Ceremony in Statler Auditorium. During the ceremony, proud family members took to the stage to pin rank insignia on 18 graduating Cornell and Ithaca College ROTC students, who swore to defend the U.S. Constitution. The students received their commissions as Army, Navy and Air Force officers – and their first salutes in their new rank.

Some officers are headed directly into service, others to additional military training or graduate education, and some will take private industry jobs and serve in the reserve forces.

Air Force 2nd Lt. Carissa Bartlett, who will receive a Cornell degree in biology and nutrition tomorrow, was assigned to a dietetic internship at Fort Sam Houston in Texas. She found ROTC classes, labs and physical activities “fun. The sense of accomplishment is really hitting me,” she said. “I’m excited to go into the Air Force.”

Visiting lecturer Navy Lt. Justan Caesar reminded the new leaders of Cornell’s history of training military leaders, which began with its founding as a requirement of the Morrill Act of 1862. Cornell’s first president, A.D. White, believed that more officers were needed than the military academies could produce, and “instituted a rigorous two-year program of military training in which all male students were required to participate. The requirement remained in effect until 1962,” Caesar said.

Caesar also noted that the first Cornellian to be granted a commission was Frank A. Barton, Class of 1891, who so influenced military training at Cornell that in 1940 the New York State Armory and Drill Hall was named Barton Hall in his honor. “Today, Cornell University is the only Ivy League school that still hosts all three service ROTC organizations …,” Caesar noted, and these students are “an integral part of fulfilling founder Ezra Cornell’s dream of ‘an institution where any person can get instruction in any study.’”

In his address to the graduating soldiers, Rear Adm. Christopher J. Paul of the U.S. Navy, deputy commander of Naval Surface Force Atlantic, said: “All of you represent, as a class, the very best of America’s most precious resource: her youth. … You’ve been imbued with a sense of duty and honor, which is an American ideal and the premise for much of our enduring legacy in the world. … You are where leadership begins.”

Paul continued: “In other walks of life, human failings may pass unnoticed. In our walk of life, their consequences are almost devastating. … What ensures our success is that our military superiority is matched only by the superiority of our ideals and our unconquerable love for them. … Today you will graduate from an Ivy League university that taught you that nothing is more liberating than to fight for causes larger than yourself. Something that encompasses you. This is your strength. … Your country needs you. Humanity needs you. Hold that honor as dearly as your country holds you. … God bless you. Boots on the ground. Aim high. Semper fi (fidelis), and fair winds and following seas.”