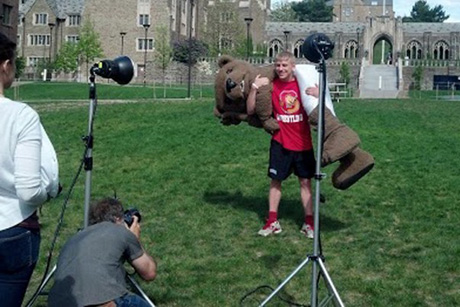 The College Athlete of the Year winners will be featured in the May 27 issue of Sports Illustrated, which hits newsstands on Wednesday, May 22. Profiles on the winners, including video, are on SI's website. The award celebrates one female and one male collegiate student athlete who have demonstrated excellent performance on the field and in the classroom, sportsmanship and commitment to community.

A four-time Academic All-American, Dake became the first NCAA wrestler to win national titles in four different weight classes, the first to win four national titles without taking a redshirt season and just the third athlete to claim four national titles. The 2013 Hodge Award winner as the national Wrestler of the Year was a three-time EIWA Wrestler of the Year. The Outstanding Wrestler of the NCAA tournament in 2013, Dake is the third Cornell wrestler to capture the award and the first since Dave Auble in 1960. He wrapped up his amazing career with a 137-4 record, including winning his final 79 collegiate matches. Dake was named the Charles H. Moore Senior co-Athlete of the Year at Cornell last night at the Senior Athlete Awards Banquet.