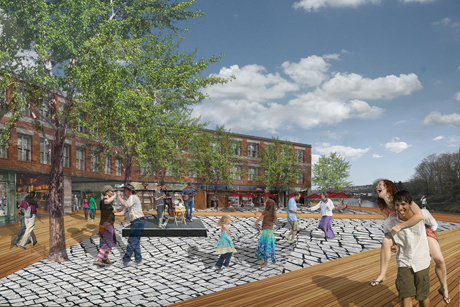 Jeremy Schaub
A rendering of what a new Rhineland waterfront might look like, as imagined by a group of Cornell landscape architecture students. 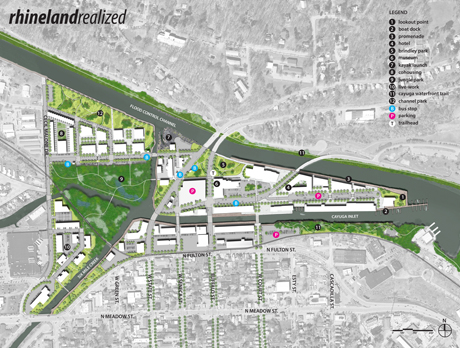 Scott M. Kelly
A plan of Ithaca’s “Rhineland” waterfront area, as proposed by a group of Cornell landscape architecture students.

Once upon a time, the Ithaca Inlet was a bustling waterfront where passengers and freight coming down Cayuga Lake from the Erie Canal would disembark and transfer to one of the two railroads that departed south from Ithaca.

With its saloons and whorehouses, the Rhineland – so called because of the large number of Germans who lived there – didn’t have the best reputation in the 19th century, and today it barely resonates with most Ithaca residents, beyond being a site of industrial buildings, boat sheds and squatter settlements.

But a group of 14 Cornell landscape architecture students has reimagined the area around the Cayuga inlet, north of the railroad tracks. As the culmination of a semester-long studio class, they presented their vision to community members at a forum at the Tompkins County Public Library May 13.

With a waterfront promenade, outdoor cafes, shops, five-story housing, a museum, a parking garage and several parks, the students’ vision was presented as a personal story that wove together past, present and future.

The students’ first step was to thoroughly explore the area on foot, stopping every 100 steps and documenting what they saw with photographs. They collected more than 600 photographs and objects found on their explorations and created videos, which they posted on their multimedia blog, Rhineland Dreams.

They also did individual research and interviews with Rhineland workers and residents. Dividing the area into four regions, they came up with design concepts that would retain the area’s ecology and history while encompassing community needs.

One of the biggest challenges was coming up with a cohesive final product, according to Lindsay Rappa ’14. But it was also rewarding.

“It was a great experience learning to work on a project as a big group,” Rappa said.

Instructor Thomas Oles, assistant professor in landscape architecture, said the students developed a good understanding of what made the Rhineland distinct. Whereas students would normally devote a week to site analysis, they spent five weeks getting to know the area as part of this project. Oles said this allowed them to gain a sense of what should be preserved in the midst of radical redevelopment. But it meant they had just a month to pull together their designs.

“It was a fairly ambitious set of tasks that they were asked to undertake, and I think they rose to the occasion,” Oles said.

Another aim was to have the students participate in a current, topical discussion about a landscape close to home and to engage as many stakeholders as possible.

The Ithaca waterfront has been the subject of scrutiny from city residents and officials for many years, with many proposals but no resolutions.

Much of the area was demolished in the 1960s, when the Army Corps of Engineers dredged a new flood control channel southward from the top of Cayuga Inlet, creating Inlet Island in the process. It was recently rezoned to allow for five-story buildings as an incentive for redevelopment.

“I loved the presentation itself, with the stories. It wasn’t what I expected,” said JoAnn Cornish, director of planning and economic development for the city of Ithaca, who attended the students’ presentation. “We’ve been looking at this area for a long time, and you kind of develop a mental fatigue. They came up with some great ideas that I’m pretty excited to take back to my colleagues and take into consideration.”