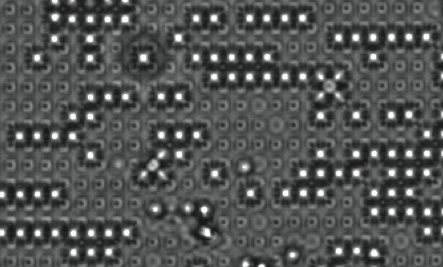 Itai Cohen lab
A confocal microscopy image of polystyrene particle clusters beginning to form crystals on a substrate. By changing the aspect ratio in the spacings of the underlying lattice, Savage and colleagues showed that it is possible to direct the growth of crystals to be oriented.

Growing thin films out of nanoparticles in ordered, crystalline sheets, to make anything from microelectronic components to solar cells, would be a boon for materials researchers, but the physics is tricky because particles of that size don’t form crystals the way individual atoms do.

Using bigger particles as models, physicists have predicted some unusual properties of nanoparticle crystal growth – in particular, that some particles, due to their sizes and the attractive forces between them, grow crystals that melt when they’re cooled.

A study led by John Savage, former postdoctoral associate in the lab of Itai Cohen, associate professor of physics, showed that colloidal crystals, which form out of particles suspended in fluid, can exhibit this odd phenomenon of cold melt. The study was published online May 20 in Proceedings of the National Academy of Sciences.

Usually people grow crystals of different materials, like the common semiconductor gallium arsenide, as layered sheets of strongly bonded atoms. Colloidal crystals are different; they form when colloidal particles suspended in a fluid self-assemble into arrays.

To get the micron-sized colloids to form crystals, the researchers introduced nanometer-sized particles into the fluid, which compete with the larger colloids for space and end up pushing the colloids together, but only when the distance between them is smaller than the nanoparticles. Because this attraction results from the thermal energy of the nanoparticle motions, the bonds between the colloidal particles are also relatively weak.

These short-ranged, weak attractions between particles, as opposed to strong atomic bonds, exhibit some surprising behaviors. For example, Cohen said, in solution the particles are only able to feel each other when they are less than a nanoparticle apart. But if the colloidal particles are resting on a substrate of particles, which sets the spacing between them, then the range of the interaction can increase dramatically.

“This allows in-plane neighbors to form loosely bound crystals whose inter-particle spacing is much larger than what you would expect was possible, given the short-ranged nature of the interaction,” Cohen said.

When they lowered the temperature so that the bonds between particles were stronger than their thermal energy, the particles jostled less. Consequently, they sat deeper in the well formed by the substrate particles and interacted with their in-plane neighbors less frequently.

The result, Cohen said, is that the colloids were no longer able to form in-plane bonds that can hold the crystal together, so particles can diffuse away and the crystal dissolves or melts. “It’s this weird effect,” Cohen said, “where the crystal melts upon cooling.”

These results could help materials researchers tailor the growth of crystals composed of nanoparticles – where similar effects arise – for new applications in electronics or energy materials.

The study, “Entropy-driven crystal formation on highly strained substrates,” was supported by King Abdullah University of Science and Technology and the National Science Foundation.