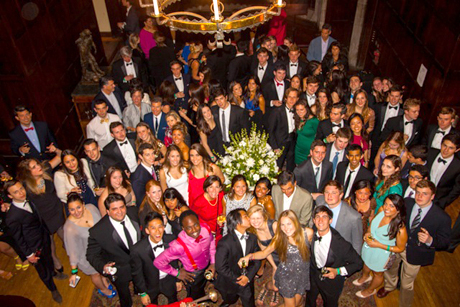 Provided
About 275 people attended the gala.

Francesco Jimenez ’15 was hoping to raise $9,000 for a local charity with a gala that has been his fraternity’s tradition for more than 90 years.

Victory Club, an annual black-tie charity ball dating to the 1920s, drew 275 supporters who played black jack and roulette April 13 at Alpha Delta Phi’s house at 777 Stewart Ave. Victory Club has helped to raise tens of thousands of dollars for local charities over the last several years. This year’s funds went to the Ithaca Public Education Initiative (IPEI), a nonprofit that facilitates community connections and support for students and teachers in the Ithaca City School District.

“I wanted to prove to Cornell and Ithaca that there are benefits to the Greek system, such as a huge fundraiser for a local initiative,” Jimenez said. “I wanted my guests to have fun but also to believe in the philanthropic mission that my fraternity was trying to accomplish.”

The biggest challenge was not having a car on campus, Jimenez said. “It was difficult for me to get around town to purchase decorations and pick up donations from local businesses,” he said.

While the fraternity had donated funds to international nonprofits in the past, this year they decided to make an impact on the local community through IPEI. The brothers invited IPEI members to attend Victory Club and encouraged them to hang a large banner at the event and display information on IPEI.

“As guests entered the fraternity foyer, it was immediately obvious that the event was for IPEI,” said Mary Grainger ’79, MPS ’87, IPEI board member and development committee chair.

Speakers included Luvelle Brown, superintendent of the Ithaca City School District, and Ithaca Mayor Svante Myrick ’09, who both highlighted the importance of creating the connections between school and community that are at the core of IPEI’s mission.

IPEI will use the funds to facilitate those connections and to support students and teachers of the school district through engagement, collaboration, gifts and grants.

But the fraternity’s impact goes well beyond the financial contribution, Grainger said. “Its value also includes the exposure IPEI got to a group of young people who may have the opportunity in their time at Cornell to volunteer or otherwise interact with the school district and IPEI,” she said.

“You seem to have outdone yourselves,” added Travis Apgar, the Robert G. Engel Associate Dean of Students, in a letter to the students. “A contribution of this size is significant to any organization, but most of to all a local initiative providing opportunities to enhance the educational experience for kids.”

Jimenez benefited personally too. His participation in the project taught him “it never hurts to ask.” He said, “Whether it is asking for a phone number, a business card, some money, or a little bit of help, people lend a helping hand if you ask for it.”