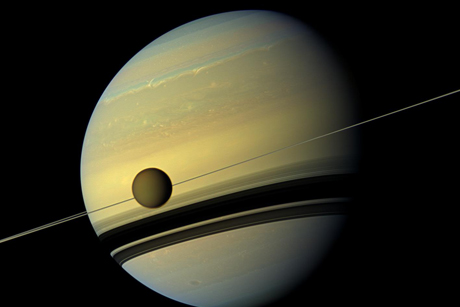 NASA/JPL-Caltech/Space Science Institute
The researchers found the density waves propagate inward and appear to be generated from within Saturn rather than from any moon.

Astronomers know that gravity from Saturn’s various moons tug at the planet’s rings and make spirals in them. But the catalyst for certain spiral patterns has been difficult to pin down. Now, two Cornell astronomers have determined the source: Saturn itself.

The entire planet can vibrate like a bell within periods of a few hours, and these oscillations cause gravitational tugs that, in turn, create the spiral patterns in the rings. The cause of the vibrations remains unknown.

“The locations and properties of these ring disturbances tell us how and with what periods the planet oscillates,” said senior research associate Matthew Hedman, whose new research was published June 11 in The Astronomical Journal. He also presented the research May 9 at the meeting of the American Astronomical Society’s Division for Dynamical Astronomy in Paraty, Brazil. “Just like earthquakes can be used to study the Earth’s interior, and solar oscillations can be used to study the interior of the sun, these vibrations in Saturn can help scientists figure out the internal structure of the giant planets.”

Saturn’s rings act as a seismograph that records these large-scale oscillations, possibly emanating from deep within the planet. The study of these records provides a completely new way to probe structure and rotation of Saturn’s interior, and the astronomers have come up with a name for it: kronoseismology.

Saturn’s oscillations are similar to what are called “whole earth oscillations” in terrestrial seismology. On Earth, these are generated by very large earthquakes, which make the Earth ring for several days.

The researchers focused on a handful of unexplained waves in Saturn’s C ring that did not appear to be linked to well-understood gravitational interactions with anything within or outside of the rings. They used data from NASA’s Cassini mission, which has repeatedly profiled Saturn’s rings using “stellar occultations” via the spacecraft’s Visual and Infrared Mapping Spectrometer instrument. The measurements record changes in light from a given star as the rings pass between the star and the spacecraft. Using numerous occultation measurements of the C ring, the researchers were able to piece together dossiers on these unexplained ring features.

The researchers found the density waves propagate inward and appear to be generated from within Saturn rather than from any moon; the six waves also have the right pattern speeds and symmetry properties to be produced by oscillations within Saturn.