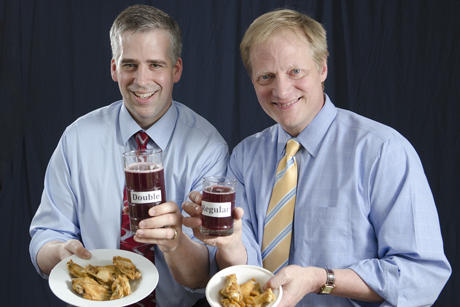 Robyn Wishna
David Just, left, and Brian Wansink have co-authored a study that shows that whether foods are labeled small, regular or double-sized influences how much people will consume – and how much they'll pay for them.

Portions, such as 8, 12 or 16 ounces – are given different labels – small, medium or large – at different restaurants.

However, how a portion is described size-wise impacts how much we eat and how much we’re willing to pay for our food, reports a new study from Cornell published online June 13 in the journal Health Economics.

The research shows that consumers use such labels to dictate how much food they think is a “normal” portion, and then adjust their intake accordingly. “People are willing to pay more for a portion that sounds larger, but they also are apt to eat more of an enormous portion if they believe it is ‘regular’ to do so,” said David R. Just, associate professor at Cornell’s Dyson School of Applied Economics. Just conducted the study with Brian Wansink, the John S. Dyson Professor of Marketing at Cornell. Both are affiliated with the Cornell Food and Brand Lab.

“These varying concepts of ‘regular’ portions made all the difference in how much people would spend and subsequently eat,” said Just. “Participants ate much more when their portion was labeled “regular” than when it was labeled “double-size.” In fact, participants who thought their portion was “double-size” left 10 times the food on their plate.”

“The huge impact of size labels suggests that both consumers and producers could benefit from standardization of food size-labeling,” said Wansink. “Clearly defining the actual amount of food in a ‘small’ or a ‘large’ would inform customers of just how much food they are ordering every time they ask for a certain size. Until then, take the time to think about what portion you’re really getting when you order your standard ‘medium’ meal.”

The study, “One Man’s Tall is Another Man’s Small: How the Framing of Portion Size Influences Food Choice,” was funded by the Cornell Food and Brand Lab.