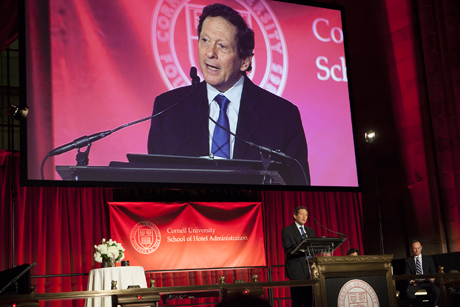 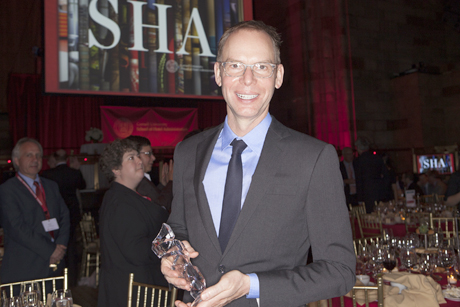 At the sold-out fifth-annual Cornell Hospitality Icon & Innovator Awards, 800 senior leaders from the travel and hospitality industry gathered to celebrate Tom Pritzker, executive chairman of Hyatt Hotels Corp., and Steve Ells, founder, chairman and co-CEO of Chipotle Mexican Grill. At the gala – which raised more than $340,000 for programs and scholarships at the School of Hotel Administration (SHA) – Pritzker received the Cornell Icon of the Industry Award and Ells received the Cornell Hospitality Innovator Award. The awards ceremony was held June 4 at Cipriani 42nd Street in New York City.

“The Cornell Hospitality Icon & Innovator Awards has grown to be a tremendous event for our alumni and for the industry at large. It is humbling to be able to honor industry leaders who have not only had a great impact on the business of hospitality but also on the global community through their dedication to the arts, philanthropy, science and sustainability,” said Michael Johnson, dean and E.M. Statler Professor at SHA.

Since its inception in 2009, the Cornell Hospitality Icon & Innovator Awards has grown to be the largest event on the SHA calendar, attracting influential business leaders from 17 countries. The event has raised nearly $900,000 for SHA scholarships and programs. More than 70 corporate sponsors helped make the 2013 awards ceremony possible.

The Cornell Icon of the Industry Award recognizes lifetime achievement in business and impact on the global community. Pritzker, who joked that he is too young to receive such an award, was chosen for his contributions in hospitality, business and philanthropy in the areas of architecture, civics, education, science, medicine and culture. He is chairman of the Hyatt Foundation, which sponsors the Pritzker Architecture Prize; chairman of Marmon Group Inc.; and chairman and CEO of The Pritzker Organization.

Introducing Pritzker, Johnson recognized the family’s lasting impact on the city of Chicago in particular. Pritzker is a member of the Civic Committee, a nonprofit with the mission of encouraging economic development in the Chicago area; chairman of the Art Institute of Chicago; and a member of the University of Chicago’s board of trustees. He also organized the Pritzker Neuropsychiatric Disorders Research Consortium, a unique collaborative effort focused on research into the biology and genetic basis of psychiatric disorders involving leading scientists from Stanford, Cornell, University of California’s Irvine and Davis campuses, and University of Michigan.

The Cornell Hospitality Innovator Awardhonors extraordinary leaders who have created, built or sustained contemporary, market-leading innovation in hospitality and travel enterprises. Ells, a classically trained chef, opened the first Chipotle in Denver in 1993 with a commitment to using ingredients from sustainable sources. As John Peters, president of the USA Today Travel Media Group, noted in his tribute to Ells, Chipotle now has more than 1,400 restaurants in 43 states, the United Kingdom, Canada and France, and the company opens more than 150 new restaurants each year. In his acceptance speech, Ells emphasized the importance of the global Chipotle team in the company’s success, saying “all 40,000-plus of us are honored” to accept the award.

Ashlee McGandy is a staff writer at the School of Hotel Administration.