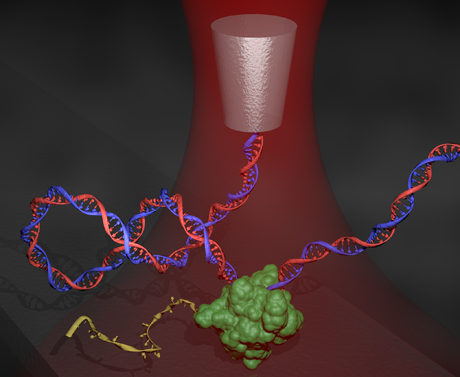 Like an impossibly twisted telephone cord, DNA, the molecule that encodes genetic information, also often finds itself twisted into coils. This twisting, called supercoiling, is caused by enzymes that travel along DNA’s helical groove and exert force and torque as they move.

For the first time, these tiny torques have been measured in the lab of Michelle Wang, professor of physics and Howard Hughes Medical Institute investigator. Using an instrument called an angular optical trap (AOT), Wang and colleagues have reported direct measurements of the torque generated by the motor protein, E. coli RNA polymerase (RNAP), as it traverses supercoiled DNA. Their technique may be used to examine the broader impacts of torque and DNA supercoiling associated with other motor proteins, and lend new insights into the gene transcription process.

DNA supercoiling is an important regulator of gene expression, but it has been hard to study because of the minute torque involved, Wang said. Using the AOT, the researchers not only recreated DNA supercoiling, but also measured, to piconewton-nanometer precision, the torque being generated by the polymerase.

The AOT uses a nanofabricated quartz cylinder as a “handle” that “holds” one end of a DNA strand and is sensitive to the torque exerted on the cylinder. The torque they measured is about 10 piconewton-nanometers, only about 1/1022 of a typical torque applied by a torque wrench, but enough to have substantial influence on many biological processes at the molecular level.

“To measure very, very small twists and torques on biomolecules is very challenging,” said Wang, whose lab has spent about 10 years developing the technology. “It’s easier to twist something than to measure how much twist you’re exerting. Our instrument lets us do both.”

The researchers also observed how torque regulates the speed of RNAP as it transcribes DNA; a resistive torque slowed RNAP and caused it to pause occasionally.

They further determined that the torque generated by RNAP was sufficient to cause DNA strand separation, i.e., melting, which pointed to the robust and strong nature of RNAP as a torsional motor protein. It also pointed to the potential role of RNAP to facilitate initiation of adjacent promoters, bind regulatory proteins and  initiate DNA replication.

Lastly, they discovered that transcribing RNAP was resilient to torque fluctuations that were quick – less than a second in duration. These results introduce a much clearer understanding of how DNA supercoiling regulates gene transcription – a window into a previously unseen world.

The study is titled “Transcription Under Torsion.” The work was supported by the National Science Foundation, the Howard Hughes Medical Institute and the National Institutes of Health.