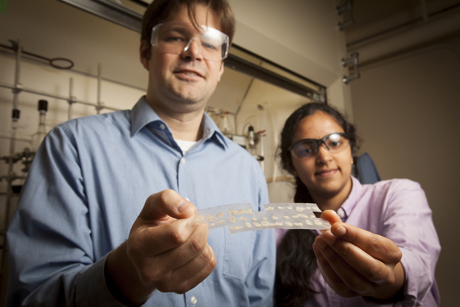 A chemical that’s often the key ingredient in improvised explosive devices (IEDs) can be quickly and safely detected in trace amounts by a new polymer created by a team of Cornell chemists.

The polymer, which potentially could be used in low-cost, handheld explosive detectors and could supplement or replace bomb-sniffing dogs, was invented in the lab of William Dichtel, assistant professor of chemistry and chemical biology. The work was published online in May in the Journal of the American Chemical Society.

RDX, short for research department explosive, is an explosive material common in military and industrial applications that is also a favorite of bomb-making terrorists. It requires a detonator to explode, but when detonated, it’s more powerful than TNT. What’s more, RDX’s vapor pressure is 1,000 times lower than TNT’s, making it almost impossible to detect without direct contact with a concentrator, like the swabs used at airport security.

Dichtel and graduate student Deepti Gopalakrishnan made a polymer that uses fluorescence to quickly and accurately ascertain whether RDX is present on a surface or in the air.

“One of the goals is to make detectors that can detect not just explosives on someone’s hands, but in the cloud around them,” Dichtel said – much like the dust cloud surrounding Charlie Brown’s friend Pigpen, he said. “If someone had an IED in their bag, it would be nice to not have to open it.”

The researchers’ work builds on a previously established technology that uses “fluorescence quenching” as the basis for detecting TNT; in the presence of the explosive, the polymer’s fluorescence shuts off.

The polymer has a random, cross-linked structure that allows it to absorb light and transport the resulting energy throughout its structure. After a certain period of time, the polymer releases this energy as light, a process known as fluorescence. If the energy encounters a molecule of explosive as it travels through the polymer, it can be converted into heat instead of light, which causes the polymer to stop glowing. This design allows the polymer fluorescence to sense extremely small amounts of the explosive of interest, enabling identification of IEDs or people who have recently handled them.

The experiments also involved testing a host of other chemicals, such as those found in lipstick and sunscreen, to rule out false positives.

Dichtel’s general research interest is in new kinds of polymers, particularly two-dimensional polymers, which are extremely orderly in their molecular pattern, like a city grid. While attempting to discover a new two-dimensional polymer, the researchers found this material, which does not have the same type of orderly structure, but turned out to be a perfect match for RDX.

The research was supported by a National Science Foundation CAREER Award and the Cornell Center for Materials Research, and the researchers used the Cornell High Energy Synchrotron Source.